The anthem of Hungary 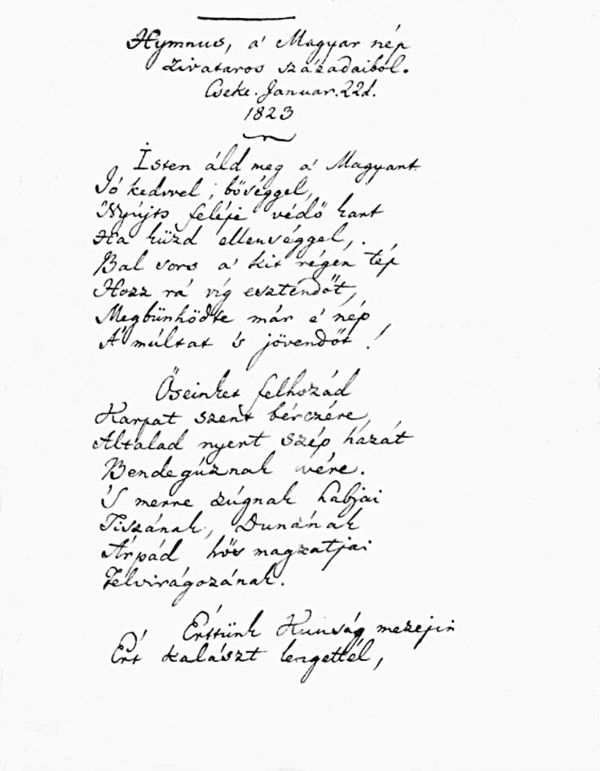 The Hymn is the poem of Ferenc Kölcsey from the stormy centuries of the Hungarian people (in short, the hymn in modern spelling), which is the state anthem of Hungary. “Hymnus” is the poet’s most influential poem, written in 1823 at the dawn of the national rebirth in the solitude of his Satu Mare. It first appeared in Károly Kisfaludy's almanac Aurora, and in a volume in 1832. The poem bears the hallmarks of romance and is framed in structure. Until the 19th century, Hungarians did not have an independent national anthem, and both Catholics and Reformed had their own national anthems. Kölcsey has translated into about 30 languages and the work of Ferenc Erkel, which became a nationwide prayer in 1844, and after several attempts, came under legal protection in 1989, when it became part of the text of the Constitution. The text of the Hymn was clarified by the poet on January 22, which is also the day of Hungarian culture. The preamble to Hungary's Basic Law, which entered into force on 1 January 2012, begins with the modernized first line of the National Anthem: "God bless the Hungarian!" History of the national anthem Before Kölcsey's work, the folk anthem of the Catholic Hungarians was the beginning of Our Lady and the shining star of the Ah, where you are, Hungarians, while the Reformed Hungarians trusted Thee from the very beginning (Psalm 90). The so-called Rákóczi song, which was banned several times by the authorities, was also popular. The latter was also composed by Hector Berlioz and Liszt Ferenc. At the beginning of the 19th century, the Austrian imperial anthem was played on official occasions in Hungary, but the Rákóczi song or the Rákóczi starter was often used as an expression of the Hungarianness. Gyula Bulyovszky, one of the former young people of March, translated the imperial anthem into Hungarian under the pseudonym in the spring of 1854, but it still did not become a folk anthem among Hungarians, and remained unacceptable to most of the public. One of the reasons for this was that the retaliatory executions, like the martyrs of Arad, ended with the imperial anthem. The text of the Hungarian anthem was written in 1823 by Ferenc Kölcsey, the great poet of the Reformation. It first appeared in Károly Kisfaludy's Aurora in 1829, without the subtitle "From the stormy centuries of the Hungarian people" in the manuscript. In the first volume of Kölcsey's work, published in 1832, it appeared with the subtitle given by the author. "Kölcsey Hymnus-a diagnoses a condition that is already past the time of punishment for sins and carries the promise of the arrival of deserved grace." According to literary historian Ferenc Kulin, Kölcsey reached the peak of his lyrical development with the Hymn. The music of the Hymn was composed by composer and conductor Ferenc Erkel in 1844, when he was invited to compose Kölcsey's poem entitled “Here is the writing, / Mature common sense, sober. Kölcsey ”won the first prize thanks to the decision of the jury, which was marked by Mihály Vörösmarty and Ede Szigligeti, among others. The winning entry was first presented at the National Theater in Pest on July 2 and July 9, 1844. His first public outdoor performance took place at the Óbuda Shipyard on August 10, 1844, at the inauguration of the steamer named after Széchenyi. The Anthem consists of eight stages, but on official occasions only the first stage is played or sung. The National Anthem made the National Anthem a national prayer, but it did not become official for a long time. In fact, it only became so when it was incorporated into the Constitution of the Republic of Hungary in 1989. At the beginning of the compromise negotiations, on December 14, 1865, when Ferenc József opened the National Assembly in Pest, he marched into the voices of the Anthem as a kind of gesture. When