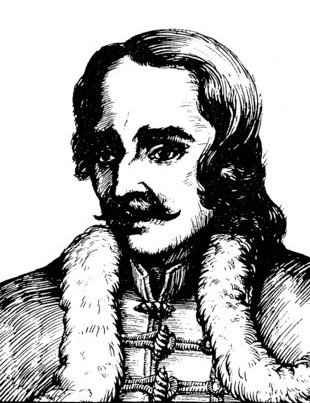 Mikoviny (Mikovini) Sámuel (Ábelfalva, 1698 – near Trencsén, March 23, 1750), Hungarian mathematician, engineer, surveyor, teacher, founder of Hungarian cartography. The pride of two nations, Hungarian and Slovak. An important Hungarian polymath of the 18th century, his wide-ranging activities had a great impact on scientific life, he can be considered the founder of Hungarian cartography, his works on river regulation and marsh drainage were of great importance, and he also played a pioneering role in the creation of domestic technical higher education. He is one of those creators whose works are timeless to this day. Three hundred years ago, he was born in Hungary, which sank into misery and became a wasteland after the Turkish wars and the Kurucs' freedom struggle. And although he was a polymath, as a member of the new generation of country-builders and scientists, he created the most lasting works in map-making. In the history of Hungarian surveying, he can be considered the founder of scientific cartography in Hungary. As a harbinger of the 19th century, several times ahead of his time, Sámuel Mikoviny made a lasting impression as a comet. Even today, its significance and magnitude in the history of natural sciences and technology cannot be accurately assessed. His studies in Latin and German are exemplary in the fields of mining, metallurgy and cartography. He raised the need to create topographic maps. Due to his early death, he was only able to realize a fraction of his great plans, yet he is considered an outstanding scientist and engineer in Hungarian history.

Presumably, he was born in Ábelfalva, Nógrád county, in 1698, in an impoverished noble family. His father, Sámuel Mikoviny, was an evangelical minister, and his mother died shortly after his birth. Between 1718 and 1721, he studied at the Lutheran lyceum in Bratislava, where his father's friend, Mátyás Bél, also taught him. The talented young man probably reached Germany thanks to his intercession and connections, where he studied at the University of Altdorf in 1721-1722 and then at the University of Jena in 1723-1724. His favorite subject was mathematics, which is why he gained great proficiency in it, but he also learned map-making, astronomical positioning, drawing, and copper engraving. After obtaining an engineering degree in October 1723, he went on a European tour. The details of this are not known, but presumably he also studied cartography in Vienna, and possibly visited Berlin, perhaps Paris as well. He returned home in 1725 and became an engineer of Bratislava County, where he was first entrusted with river regulation and dam construction. He held this position until 1735, but in the meantime - as his expertise was greatly needed in the backward country - he surveyed the Esterházy family's Tata estate in addition to many smaller jobs, and from 1729 he also worked as the first engineer of the Court Chamber, in the capacity of geometry and architect. From 1731, he began preparing county maps for Bél Mátyás' Notitia Hungariae, a book presenting the history and geography of Hungary, for which he carried out thorough field surveys. Recognizing its importance, the leaders of the country also provided help for this work. He often visited Selmecbánya, where he helped production as an engineer, and from 1735 he taught as the first teacher of the Selmecbánya Mining Academy in Selmecbánya during the winter months. The world's first technical higher education institution: the later Selmec Academy was the first non-church-founded higher education institution within the Habsburg Empire; during a two- or three-year training period, it provided the training of technical specialists who are involved in various aspects of mining (ore mining, coal mining, salt mining)