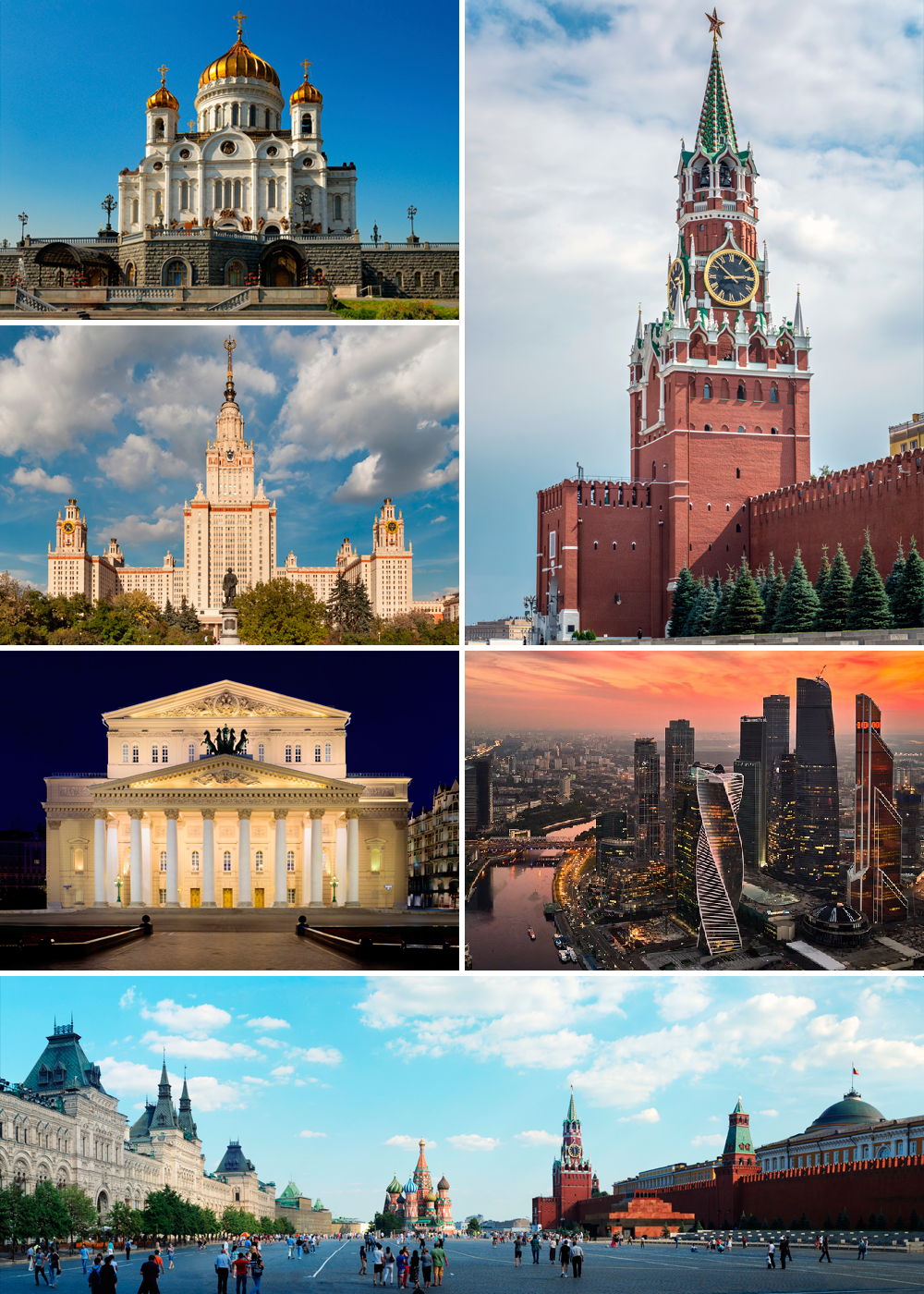 Moscow (Russian: Москва) is the capital of Russia. It is the primary political, cultural, economic, educational and transport center of the country. It is a city of federal significance in the Moscow Region, on the banks of the Moscow River, and is one of the most important Orthodox Christian religious centers, "the third Rome". With an area of ​​more than 2,500 km² and 12.6 million inhabitants, it is the largest and most populous city in Europe. According to legend, Moscow was founded by Grand Duke George I of Kiev, the first written records of the city date back to 1147. In the 18th and 19th centuries it was a bourgeois town, and during the Soviet Union it became a workers' town. The city has ten administrative districts and 123 districts. In 2009, it was the third richest city in the world in terms of the number of billionaires living here, and it was also the most expensive city in the world several times. Its squares and streets (the most famous of which is Red Square), its huge buildings (such as the Kremlin ensemble, the Cathedral of the Blessed Virgin Mary and the Cathedral of Christ the Redeemer or the Seven Sisters skyscrapers) and the stations of its extremely extensive metro network are world-famous. The cityscape is very diverse, because in addition to the monumental monuments of the tsarist and Soviet times, there are also buildings of the modern age: many of Europe's tallest skyscrapers are located in Moscow.

They lived in the territory of today's Moscow already in the Neolithic, the first settlements appeared here about three thousand years ago. Slavic tribes occupied the area in the second half of the first millennium CE. The city was mentioned by name for the first time in 1147, and in 1156 Prince Yuri Dolgoruky surrounded it with piles and moats. In 1237-38, the Tatars razed it to the ground. It was then rebuilt and became the capital of an independent principality. In 1300, the prince of Moscow was Daniil Aleksandrovich, the son of Alexander Nevsky, a member of the Rurik dynasty. The city grew rapidly, thanks to the advantage of being close to the Volga River. In 1304, thanks to the victorious wars of Danyiil's son, Yury Danyiilovich, who ruled with the support of the Golden Horde, and his younger brother and successor, Ivan I (Kalita), the territories belonging to Moscow were expanded. In 1480 III. Ivan managed to free himself from Tatar influence, and Moscow became the capital of an ever-growing empire. Under the reign of later tsars, such as Ivan the Terrible, the empire, although growing, slowly began to decline. In 1571, the Crimean Tatars captured and burned Moscow. Between 1610 and 1612 the Polish-Lithuanian armies occupied the city, in 1612 the people of Nizhny Novgorod and other Russian cities revolted against the Polish conquerors, captured the Kremlin and killed the conquerors. In 1613, Mihály I was elected tsar at an assembly. With him, the rule of the Romanov dynasty began, which lasted for more than three hundred years. In 1703, when Peter the Great founded Saint Petersburg, Moscow ceased to be the capital, but its development did not stop. When the armies of Emperor Napoleon I approached Moscow in 1812, the Battle of Borogyno took place not far from it. On September 14, the townspeople evacuated and burned the town. Napoleon's army was so affected by the cold and hunger that they had to retreat. After the liberation of the city, reconstruction began, for example, the Bolshoi and Mali Theaters, the Alexander Garden and the first Moscow hospital were built. In January 1905, Alexander Adrianov was appointed the first mayor of Moscow. After the revolution of 1917, Lenin, fearing a possible foreign invasion, made Moscow, further away from the border, the capital instead of St. Petersburg (March 5, 1918). As a railway junction, Mos