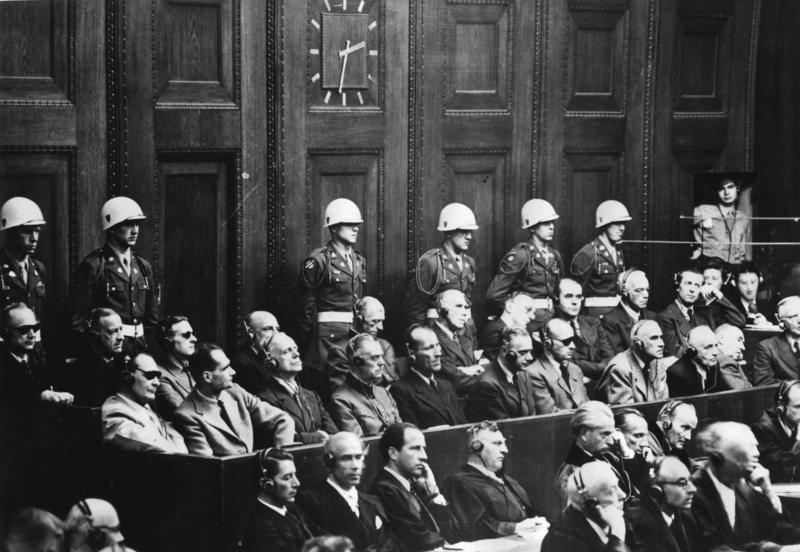 The Nuremberg Trial was the first trial in which the Allied powers condemned the political, military, and economic leaders of the German Empire for their crimes committed during World War II. The lawsuit took place in Nuremberg, Germany. The accused came from among the main leaders of the National Socialist German Workers' Party, the Kriegsmarine, the Wehrmacht, and other functionaries. Originally, 24 people would have been put on the dock, but their numbers were smaller by the start of the trial for various reasons. During the Nuremberg trial, various organizations (Gestapo, SD, SS) were also convicted. The trial of the chief culprits ended on October 1, 1946, and twelve defendants were sentenced to death by rope, sentenced to seven weeks in prison, and three acquitted. Ten convicts were executed on October 16, 1946, Martin Bormann was sentenced to death in his absence, and Göring committed suicide on October 15. Other similar lawsuits were extended to the whole of Germany. By 1949, approximately 200 more people had been indicted, including doctors experimenting on people, commanders of concentration camps, and judges supporting the National Socialist practice.

Even during the war, the Allied Powers decided to punish the NSDAP and other organizations and individuals involved in the war, but as there were no historical models for international court proceedings against aggressors, war criminals, and criminals against humanity, a concrete settlement he was born only later. The beginning of the investigation of the crimes also began roughly during this period. As a first step in this, an organization called the “Extraordinary State Committee for the Investigation and Investigation of the Crimes of the Invaders” began operating in the Soviet Union shortly after June 22, 1941. Two years later, on October 23, 1943, seventeen Western states (including the United States, Australia, and Canada) established a joint commission of inquiry called the “United Nations Commission on the Investigation of War Crimes”. Both initiatives were designed to prevent later defendants from escaping to a neutral country.

Opponents and supporters of war trials

One of the main victims of German aggression, the Soviet Union, raised the issue of punishing the main war criminals with the utmost consistency. Among the great powers of the West, however, there have been debates about how. Several respectable people in the United States have opposed the international lawsuit. Their arguments included that during a trial, defendants have a chance to defend themselves that they would not have liked to see. The main contender for these arguments was Secretary of State Cordell Hull, who called for the culprits of the war to be hanged without trial. He was not afraid to keep his plan silent before either President Franklin D. Roosevelt, British Foreign Secretary Robert Anthony Eden, or Winston Churchill (Prime Minister). He reiterated his position in October 1943 when the foreign ministers of the Soviet Union, the United States and Great Britain met in Moscow. In his speech, he explained: “If I could do as I please, I would not do much theory with Adolf Hitler, Benito Mussolini, Tojsó and their main accomplices, but would bring them to justice in an impromptu court. And the next day at dawn, there would be a historic interlude. ” However, his proposals were not accepted by the Allied great powers. On October 30, 1943, a "Declaration on German Terrorist Actions" was signed, in which