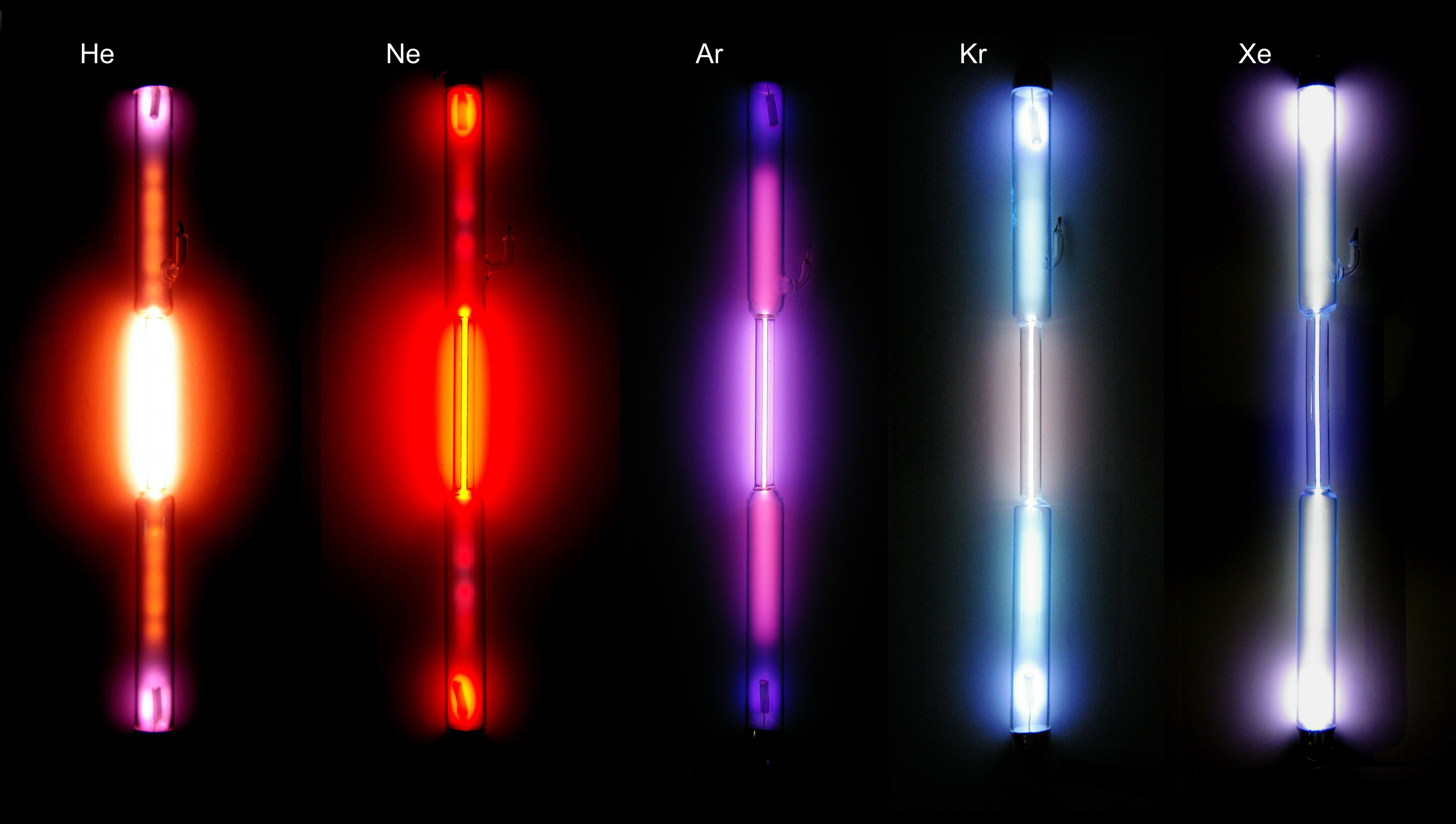 Noble gases are elements in main group VIII (IUPAC group 18 of the Periodic Table). Helium (He), neon (Ne), argon (Ar), krypton (Kr), xenon (Xe) and radon (Rn) belong to this group. According to some hypotheses, due to relativistic effects in the seventh period, the carbon group flerovium exhibits the properties characteristic of noble gases in VIII. instead of main group oganson. Noble gases have many similar properties. Colorless, odorless, monoatomic gases at standard temperature and pressure. They are chemically inert and can only be reacted under extreme conditions. The properties of noble gases can be well explained by modern theories of atomic structure: according to them, the outermost electron shell of noble gases is saturated (1s2 for helium and ns2np6 for other noble gases) and the resulting stable electron configuration is responsible for their very low reactivity. Only weak van der Waals forces act on my gas, so their boiling point is the lowest of all the elements. There are only a few degrees of difference between their melting and boiling points, so they exist only as a liquid in a narrow temperature range. Neon, argon, cryptone and xenon are recovered from the air by fractional distillation after liquefaction. Helium is obtained from natural gas, which in some places has a helium content of up to 7%, by cryogenic separation techniques, and radon is usually isolated from the radioactive decay of dissolved radium, thorium or uranium compounds. Due to their indifference, they can be used in many areas where chemical reactions are to be avoided. For example, incandescent lamps are often filled with cryptone gas to prevent tungsten fiber oxidation, and deep-sea divers use helium in their respirators mixed with oxygen to reduce high-pressure, normal-air-induced the chance of oxygen toxicity. In the past, helium was used to fill airships instead of flammable hydrogen, but today its use is not significant, but it is still used to fill meteorological balloons.

The term noble gas comes from a mirror translation of the German word Edelgas, first used by Hugo Erdmann in 1898, referring to the extremely low reactivity of the elements. The name is analogous to the term precious metal, which also refers to the low reactivity of the elements. In 1784, the English physicist and chemist Henry Cavendish, studying the composition of the air, observed that a repeated electric discharge of excess oxygen in the air sample did not react with part of the gas, which determined it to be no more than 1 / 120th of the air. During the solar eclipse of August 18, 1868, Pierre Janssen and Joseph Norman Lockyer observed a yellow line in the spectrum of the chromosphere of the Sun next to the D line of sodium, suggesting a new element. The element was named helium after the Greek name of the Sun (ήλιος, Helios). The same spectral line was later observed by Luigi Palmieri in volcanic gases erupting from Vesuvius in 1881, and then William Ramsay finally confirmed his presence on Earth during the study of atmospheric gases. In 1895, John William Strutt discovered that the density of nitrogen obtained from the air by removing oxygen, carbon dioxide, and water vapor was greater than that of nitrogen chemically produced from ammonia. Together with Ramsay, he assumed that the nitrogen extracted from the air was mixed with some other gas, so in one experiment, he heated the magnesium in nitrogen to make a small amount.