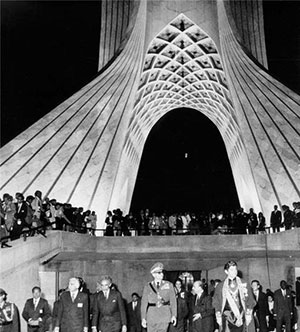 The Persepolis Coast was officially called the 2,500th Anniversary of the Founding of the Iranian Empire State or the 2,500th Anniversary of the Persian Empire. Also in New Persian, دوهزار و پانصدمین سال بنیانگذاری شاهنشاهی ایران (the 2500th anniversary of the founding of the Persian Empire) is the official name. The event was held from October 12 to October 16, 1971, and was staged by Iranian Shah Mohammad Reza Pahlavi, a former Iranian ruler, at the historic ruins of Persepolis, the capital of the Persian Empire. The purpose of the prestige ceremony was primarily to express the greatness of Iran and Mohammad Reza Pahlavi, as well as to present them in good faith to the world. Many foreign monarchs and heads of state and government paid their respects at the event (including even from Hungary). Their accommodation took place in a dazzling, professionally designed tent city next to the ruined city, satisfying all kinds of luxury needs. There is no clear data on the exact costs. According to some sources, the parade on the ruins of Persepolis alone cost $ 100 million ($ 640 million today), but as events, construction and lavish lighting celebrated the founding of the Persian Empire took place in other parts of the country that year, it is likely that their combined total cost could have been $ 100 million. As part of this ceremony, the building, originally called Sahjad (Aah Shah Memorial Tower) and later renamed the Azadi Tower (Freedom Tower), was also built. According to other opinions, $ 22 million went to the Persepolis party. The shah considered the level of costs insignificant and ignored the troubles of the country. With noble simplicity, he told reporters: The extent of waste among Iranians and non-Iranians has generated terrible anger against the Shah, whose regime has long been dissatisfied with bad reforms, corruption, excesses of power (especially the terror of the SAVAs) and exaggerated modernization, and Westernization. due to. Although the event was admired by foreigners, outside observers also condemned the shah, while spending huge sums on itself and such events (not to mention the army and corrupt state machinery), in a significant part of the country (especially in rural areas) poverty, unemployment, lack of drinking water and health problems. In terms of his decadence, however, the Shah's party was far surpassed by Jean-Bédel Bokassa's imperial coronation ceremony (1977), who imitated Napoleon Bonaparte and renamed the Central African Republic the Central African Empire, but was also influenced by Pahlavi. An unthinkable magnification of Bokassa’s common-sense, miserable country could have cost $ 20 or even $ 30 million. Ankle fell in the same year as the Iranian shah. To this day, many historians also voice the fact that the event is based on historical disbelief, so II. To the alleged “human rights” charter of King Kurus of Persia, which was the first to be considered as such (or rather sought to advertise). In doing so, Mohammad Reza Pahlavi, a believer in the continuity of the Persian Empire, also wanted to please the world as a “respecter and defender” of human rights, while suppressing the internal opposition, imprisoning, torturing and executing its members. Moreover, the SAVAI even searched for opposition and resistance abroad, killing several of them. The other, extremely detrimental nature of the party is that of the tent