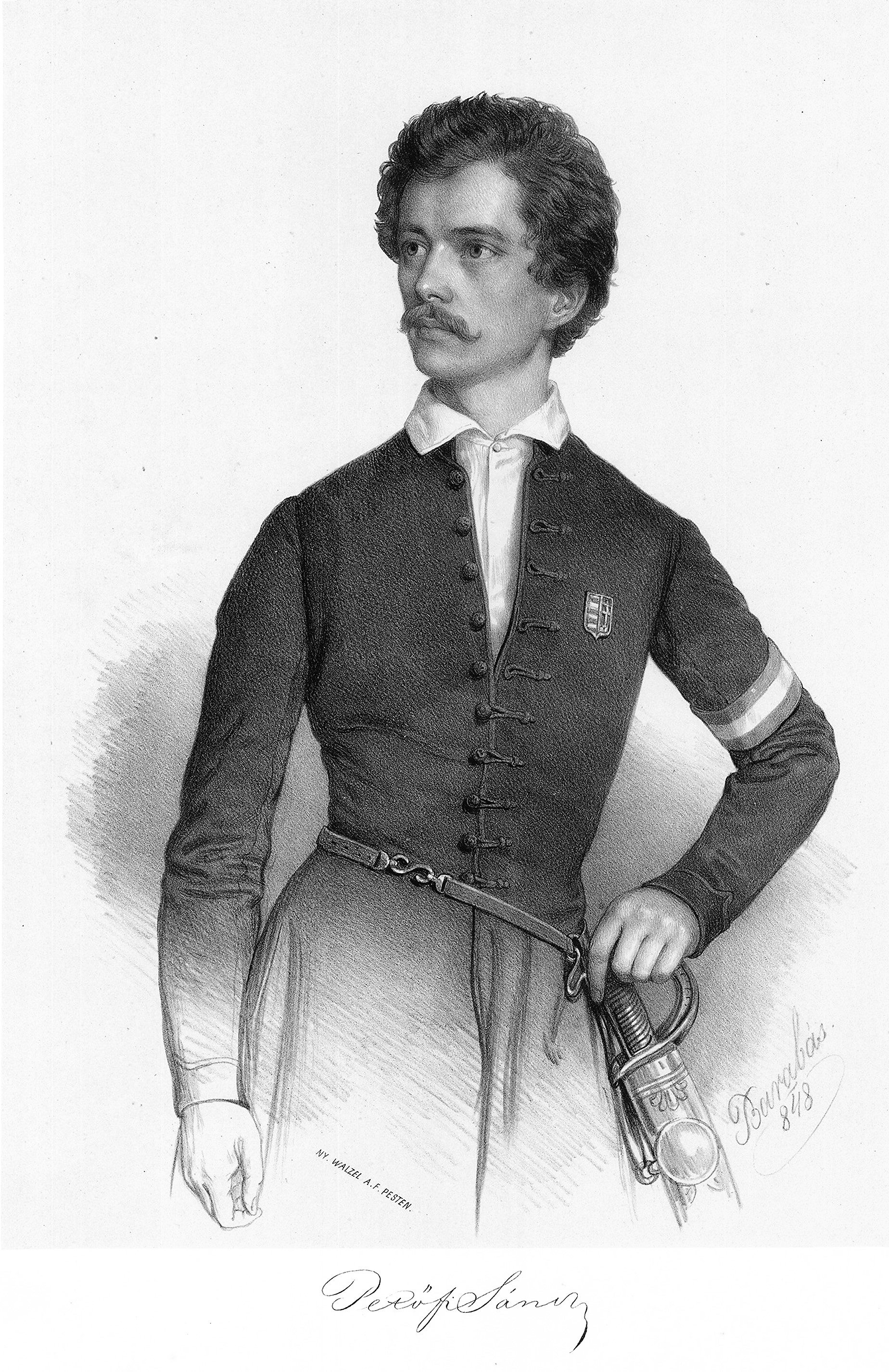 Sándor Petőfi (born Sándor Petrovics, Kiskőrös, January 1, 1823 - around Fehéregyháza, July 31, 1849) is a Hungarian poet, revolutionary, national hero, one of the best known and one of the most prominent figures in Hungarian poetry. During his short life, he wrote nearly a thousand poems in Hungarian, of which about eight hundred and fifty remained for posterity, and the better known ones were translated into many other languages. He lived in Pest from 1844, and from 1846 he organized a literary society with his friends. Despite his young age, he had gained national recognition by this time. As one of the leaders of the “Youth of March,” he took part in the revolution of March 15, 1848, of which he became a symbol. The 26-year-old poet then also took part in the struggles for freedom. According to the present-day position of historians, he also sacrificed his life for Hungarian freedom, as he fell on July 31, 1849, during a headless escape following the battle of Sighisoara, in a massacre perpetrated by Cossack ulans persecuting the military. However, all the circumstances of his disappearance have not been clarified to this day. He is the performer of Hungarian romanticism and has introduced hitherto unknown themes in Hungarian poetry: he first appeared in family poetry, in his love poems the depiction of marital and conjugal love, and in his landscape poetry the “sheer” drawing of the Hungarian Great Plain. He wrote for the first time in his poems about "world freedom", and through him a completely new voice was heard in Hungarian literature. He spoke plainly, simply to everyone, as he incorporated the language of the people into literature and centered the idea instead of the outward form of the poems. Many of his poems are known to almost all Hungarians. A song, puppet show, cartoon and rock opera were also made from the narrative poem of John the Knight. His best-known poem is the National Song, which is the current message of the revolution of March 15, 1848, and an outstanding work of Hungarian patriotic poetry. Its memory is preserved in Hungary and in the Hungarian-inhabited places of the Carpathian Basin by several museums and memorial houses, as well as countless street names, statues and memorial plaques.

His father, István Petrovics (Kartal, August 15, 1791 - Pest, March 21, 1849), was a butcher from a Slovak family in the Highlands (as opposed to the popular Serbian origin), but he declared himself Hungarian. The Slovak origin of his father is probable by its Lutheran religion (Serbs are usually Orthodox) and by the researches of József Kiss and Lajos Jakus, who traced Petőfi's origin back to his father's branch until 1685, to Vagyóc in Nitra County. In other words, the Petrovics come from the Highlands as well as the maternal branch, which originates from the village of Necpál in Turóc County. His paternal grandfather was Tamás Petrovics, who moved to Aszód in 1770 at the age of 26. On the paternal branch, the ancestor of the family, Márton Petrovics, won nobility from King Leopold I on May 30, 1667, which was proclaimed on March 30, 1668 in Nitra; this noble letter was still with Petőfi's father in 1835. The poet also knew about his noble origin, but as an adult, as a democrat, he did not declare his noble rights, fully identifying himself with the people. Prior to her marriage, her mother, Mária Hrúz (Necpál, August 26, 1791 - Pest, May 17, 1849), worked as a washerwoman and maid at the Lutheran pastor in Maglód, Mihály Martiny. She was a native Slovak speaker and switched to the Hungarian language only as a woman. According to the memory of János Arany, “he did not always pronounce the Hungarian word clearly, but he spoke it continuously.” István Petrovics �