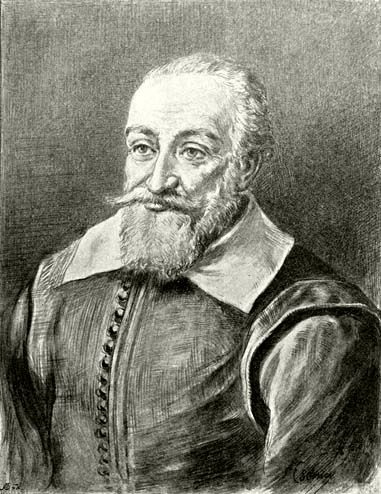 Albert Szenczi Molnár (Szenc, August 30, 1574 – Cluj, January 17, 1634) Hungarian Reformed minister, linguist, philosopher, psalmist, church writer, literary translator. One of the great recognitions of his work is that Péter Pázmány, archbishop and cardinal of Esztergom, the leading figure of the counter-reformation in Hungary, remembered him with praise. He spent most of his life abroad (Wittenberg, Strassburg, Heidelberg, Altdorf, Marburg and Oppenheim). He could have friends of famous European scientists such as Johannes Kepler and Martin Opitz. The majority of his works were born abroad, but he still carried out his activities for the benefit of his country. Quoting his friends in one of his letters, he wrote: His pioneering Latin dictionary was in use with revisions until the middle of the 19th century; he provided the first definition of many literary and scientific terms in Hungarian. His Latin-language Hungarian grammar was used as a manual until the 18th century, thus – in addition to its importance in the history of science – it greatly contributed to the unification of Hungarian language usage and spelling. For Reformed Hungarians, his many psalm translations, the corrected edition of the Károlyi Bible, the translation of Kálvin's Institute and the Heidelberg Catechism are still living legacies. He had an outstanding impact on the development of the Hungarian literary language and Hungarian poetry. At the same time, he also sang virtuosically in Latin.

His great-grandfather came from Székelyföld and fought as a soldier of Mátyás Hunyadi at the siege of Naples, then settled in the county of Bratislava. His son was called Molitoris, i.e. Molnár, after his occupation, and this was also the name of his grandson, i.e. the father of Albert Szenczi Molnár, who was a woodcarving miller living in the market town of Szenc. At the time of Albert's birth, the father was still well-to-do, but later he became impoverished, and after his death in 1603, the family lived in poverty. Molnár began his studies in Albert's hometown on September 7, 1584. After his mother's death on December 4, 1585, he studied in Győr for five months in 1586, Gönc for one and a half years from 1587, and Debrecen from 1588 to the summer of 1590. In the company of Gáspár Károlyi Göncön, he witnessed the translation and printing of the Vizsolyi Bible, in Debrecen he was tutored by István Csorba. He first visited the birthplace of the Reformation, Wittenberg, in the summer of 1591 he studied at the Holy Cross High School (Gymnasium zum Heiligen Kreuz) in Dresden, in the fall again in Wittenberg, and in 1592 in Heidelberg. On May 1, 1593, he went to Strasbourg, where he was admitted to the Collegium Wilhelmiticum as an alumnus; On May 21, 1595, he was ordained as a Bachelor of Arts. In the summer of 1596, he visited Geneva, where he met the elderly Tódor Béza. Returning to Strassburg, he continued his studies, but in the same year he was banished from the Lutheran city for his Calvinism. At that time, he took a longer trip to Switzerland, Italy, and returned to Germany. On December 4, 1596, he was admitted as a theological student at the Casimirianum in Heidelberg, and on January 22, 1597, he enrolled at the university, where he studied until 1599.1599. at the end of October, after nine years of wandering abroad, he returned home to gain patrons among the Protestant nobility. He stayed in Szent until 1600 and toured the Highlands. In March 1600, he traveled back to Germany, where he visited several cities (Altdorf, Heidelberg, Speyer, Frankfurt). He studied in Herborn from November 23; according to his certificate, which was issued by Johann Piscator on July 19, 1601, he would have been welcome as a teacher at the institution, but this was not possible. In 1601, he was a proofreader at Johannes Saur's publisher in Frankfurt, and in 1602 he worked as a tutor in Amberg. January 1603