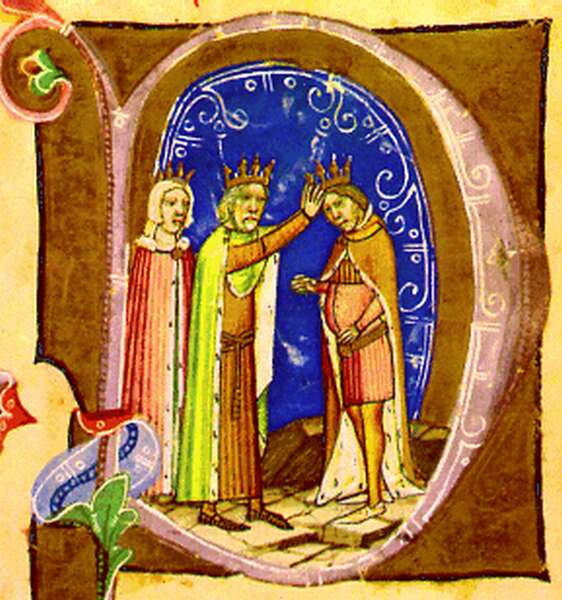 István V (October 18, 1239 – August 6, 1272) King of Hungary between 1270 and 1272, IV. He is the first-born son of King Béla and Queen Mária Laszkarisz. From 1246 to 1257, Duke of Slavonia, then Duke of Transylvania (dux Transsilvanus), between 1258 and 1260 Duke of Styria (dux Stiriae). From 1260, he was once again the Duke of Transylvania, and at the end of 1262 he assumed the title of "junior king" (iuinior rex) and became the de facto independent ruler of the eastern part of the country. He successfully defended this title against his father. From 1270 until his death, he was the king of all Hungary (totius Hungariae). In Hungarian historiography, he appears contradictory, on the one hand, as an ungrateful, violent and power-hungry boy, and on the other hand, as a valiant soldier and excellent general, or an excellent organizer and talented ruler.

ARC. As the eighth child of Béla and Mária Laszkarisz, he was born in 1239 as the first-born son, and he became the rightful heir to the throne. He survived the Tatar period in Dalmatia together with his parents and sisters. In 1242, Herbord I of the Osl family, a member of the royal court, guarded and protected him from Tatars when he was kept in the Klissa castle. His father already crowned him as a child. Also as a child, for political reasons, as part of the alliance with the Kuns, the daughter of the Kun prince Szejhán, who had settled back in the country, was betrothed to him, named Erzsébet. Their marriage later produced five daughters and two sons. In 1246, he is already mentioned as a crowned king and prince of Slavonia.

ARC. Béla's certificate issued on January 10, 1246 contains a reference to the first coronation of his son István, there is no reason to doubt that the coronation was done by the will of the king to secure the right of succession to the throne of the then only male child. At that time, or even before that - according to tradition - the prince also received Slavonia, because the certificate already calls the minor István "the prince of all Slavonia". At that time, Slavonia was still governed by her sister Anna's husband, Rosztyiszlav - ban of Slavonia on June 2, 1247 - who was in full control of the reorganized Balkan region even later. In 1257, the already-aged duke was appointed head of Transylvania by his father, and in the following year he was already governing the southern part of Styria, a new province bordering Slavonia. After the Bratislava Peace, an uprising broke out in Southern Styria, which belonged to Hungary, in 1258. The Styrian uprising IV. Béla defeated him and installed his son István as the Styrian prince at the head of the province. He also attached the counties of Zala and Vas, as well as the Bakony Forestry to the Duchy. At the end of 1259, the Styrians rebelled again, and II. They sided with the Czech King Ottokar, leaving only Pettau and a few smaller castles in Hungarian hands. On July 12, 1260, the battle fought near Kroissenbrunn in Moravia put an end to Hungarian rule over Styria, IV. At the end of the summer, Béla concluded an armistice in Bratislava II. With Ottokar. The battle of Kroissenbrunn and the events that followed are probably IV. They also led to the deterioration of the relationship between Béla and his son István. After István's initial successes in the battle IV. It ended in defeat due to Béla's leadership error. István, the leader of the vanguard, was wounded in the battle, he was in a difficult situation due to the delaying main army, and for a long time nothing was known about the prince's fate in the Hungarian camp. In the Peace of Vienna concluded on March 31, 1261, IV. Béla resigned from Styria. After the defeat in Moravia IV. Béla put the still-minor Prince Béla in charge of Slavonia, and sent Prince István, who proved his military prowess, back to Transylvania. Despite this, István was still ready to cooperate with his father. In 1261, they led together again