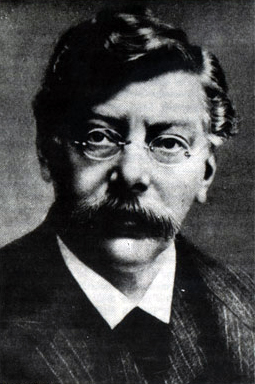 Victor Adler (Prague, June 24, 1852 - Vienna, November 11, 1918) was an Austrian social democratic politician. During his travels, he met leading German socialist politicians and became a committed socialist in the 1880s. He is credited with publishing several socialist newspapers, and he played a significant role in the founding of the Austrian Social Democratic Workers' Party (SDAPÖ, today's SPÖ), of which he became one of the leading individuals. As a representative, he also fought for the introduction of universal suffrage, which took place in 1907. The unity of the party, which promised the nationalities autonomy and a federal system, could not be preserved due to the secession of the Czech socialists. During the First World War, he unsuccessfully sought a peaceful settlement. He then supported the unification of Austria with Germany. He died during this effort.

Victor Adler was born on June 24, 1852 in Prague to a wealthy Austrian family of Jewish origin. He graduated from the University of Vienna in 1881. During this period, he joined the German national organization led by Georg von Schönerer, from which he later left due to the growing anti-Semitic nature of the movement. During his travels in Germany, Switzerland and England, he met the outstanding figures of German socialism, Friedrich Engels and August Bebel, as a result of which he became a committed socialist by 1883. He made a lifelong friendship with Engels and kept in touch with him by letter. In 1886, he founded the socialist weekly Gleichheit (Equality), of which he also became the editor-in-chief. After the newspaper was banned in 1989, he created the Arbeiter Zeitung (Workers' Newspaper), which became the main mouthpiece of the socialists. He also played an outstanding role in the founding of the united Austrian Social Democratic Workers' Party (SDAPÖ) (between December 1888 and January 1889), of which he became one of the leading individuals. The party supported the autonomy of nationalities and the creation of a federal system. In 1905, he was elected a representative of the South Austrian Parliament (Landtag) and soon became the leader of the fight for universal suffrage, which was introduced in 1907. The secession of the Czech Social Democrats in 1911 thwarted his efforts to keep the party single and unified. . During the First World War, he strove for a peaceful settlement, but in this regard the socialist conference in Stockholm in 1917 was unsuccessful. In October 1918, he became a member of the new Austrian government and supported the unification of Austria with Germany. However, he was unable to achieve this goal, as he died in Vienna on November 11, 1918.