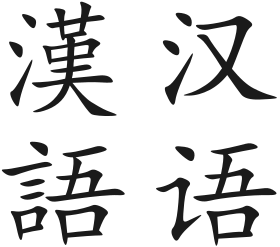 Chinese (汉语/漢語, /華語, or ; Pinyin: Hànyǔ, Huáyǔ, or Zhōngwén) is part of the Sino-Tibetan language family. Although most Chinese consider the various variants of spoken Chinese to be one language, the variation in the spoken languages ​​is comparable to the variations in, say, Romance; the written language has also changed shape over time, though more slowly than the spoken form, and is therefore able to outpace variations in the spoken form. About 1/5 of the world's population uses one form of Chinese as a native speaker, so if it is considered one language, Chinese is the language with the largest number of native speakers in the world. Chinese (spoken in its standard form, Mandarin) is the official language of China and Taiwan, one of the four official languages ​​of Singapore, and one of the six official languages ​​of the United Nations. The terms and concepts that Chinese people use to think about language are different from those used by Westerners; this is due to the unifying effect of the Chinese characters used for writing and also to the differences in the political and social development of China compared to Europe. China succeeded in maintaining cultural and political unity at the same time as the fall of the Roman Empire, a time when Europe was divided into small countries whose differences were determined by language. The main difference between the Chinese concept and the Western concept of language is that the Chinese people very much distinguish written language (wen) from spoken language (yu). This distinction is extended to include the distinction between the written word (zi) and the spoken word (hua). The concept for a different standard language and unifying the spoken language with the written language in Chinese is not very prominent. There are several variants of spoken Chinese, of which Mandarin is the most important and prominent. But on the other hand, there is only one written language. (See paragraph below). Spoken Chinese is a kind of intonation language related to Tibetan and Burmese, but genetically unrelated to neighboring languages ​​such as Korean, Vietnamese, Thai and Japanese. Even so, these languages ​​have a great influence from Chinese in the historical process, linguistically and extralinguistically. Korean and Japanese both have a writing system that uses Chinese characters, which are called Hanja and Kanji, respectively. In North Korea, Hanja is no longer used and Hangul is the only way to display the language while in South Korea Hanja is still used. Vietnamese also has many words borrowed from Chinese and in the past used Chinese characters.

The relationship between spoken Chinese and written Chinese

For information on spoken and written Chinese, see Spoken and written Chinese The relationship between spoken and written Chinese is quite complex - the complexity of this relationship is further complicated by the various variations of spoken Chinese that have evolved over the centuries since at least the late-Han dynasty. Even so, the form of writing has not changed that much. Until the 20th century, most formal Chinese writings were in the form of Classical Chinese (wenyan) which was very different from all spoken variants of Chinese just as Classical Latin was different from modern Romance. The Chinese script, which is more similar to the spoken language, is used to write informal works such as novels containing everyday language. Since the May 4th Movement (1919), the formal standard of Chinese writing has been baihua (Vernacular Chinese), which has a grammar and vocabulary that