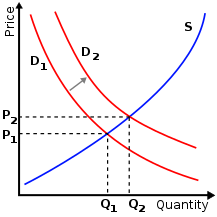 Economics is a social science that studies human behavior in managing limited resources and channeling them into various individuals or groups in a society. The term "economy" itself comes from the Greek, namely (oikos) which means "family, household" and (nomos) which means "rules, rules, laws". Broadly speaking, the economy is defined as "household rules" or "household management". While what is meant by economists or economists are people using kdono economic concepts and data at work.

Meaning of the word

The word "economy" is an borrowed word from Ancient Greek which means "management of the household". This word is a combination of two words, namely ("house") and ("management; distribution"). This word is recorded for the first time used in a work made by a church in 1440 to describe a system of management or administration. The economic meaning that is widely used today, namely the economy as a system used in a country or region, only developed in the 19th or 20th century.

Economic actions are carried out by observing the rules known as economic principles. There are two basic principles in carrying out economic action. First, the economy is carried out with the aim of obtaining as much profit as possible by paying attention to expenses as part of the calculation of profits. Second, the benefits obtained as much as possible only require as little expenditure as possible. These two principles serve as general guidelines for carrying out economic actions. The results of the application of economic principles can be observed through the level of efficiency as measured by the comparison between the profits obtained and the expenditures required during economic activities. An economic action is said to be efficient if a result is achieved with the most appropriate sacrifice and is accompanied by cost savings.

Economics Economics is widely discussed in a special science known as economics, which includes sociology. history, anthropology, and geography. Some parts of economics in the form of applied sciences such as production, distribution, trade, and consumption are also discussed in other disciplines such as engineering, management, business administration, applied science, and finance. There are many sectors in the economy, which are then grouped into three main sectors, namely the primary sector, the secondary sector, and the tertiary sector.

Included in the primary sector are sectors that use natural resources directly, including agriculture, forestry, fisheries, and mining. Several manufacturing industries whose production processes are closely related to natural resources are also often categorized as industries in this sector, including industries in the field of packaging, refining, or gathering natural resources. This sector is usually the main sector, and contributes the most to the economy of developing countries. However, there has been a decline in the number of workers operating in this sector, both in developed and developing countries. In the United States, the workforce in this sector accounts for only about 3% of the total workforce.From the primary sector