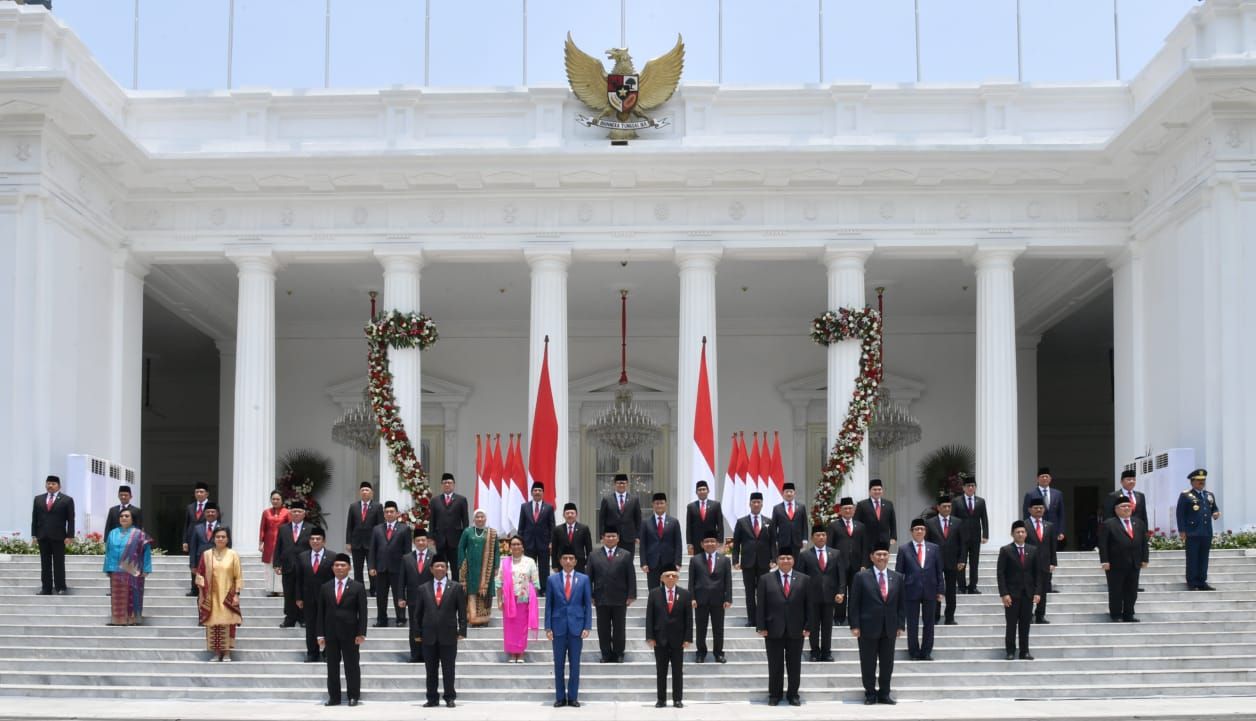 The Advanced Indonesia Cabinet is the cabinet of the Indonesian government led by President Joko Widodo and Vice President Ma'ruf Amin. The composition of this cabinet comes from professional circles, the proposals of political parties carrying the Jokowi-Amin pair in the 2019 Presidential Election which are members of the Working Indonesia Coalition plus the Gerindra Party and PAN which joined later, as well as the Jokowi-Amin pair's success team in the 2019 Presidential Election. The composition of the cabinet was announced by the President. Jokowi on October 23, 2019 and was officially sworn in on the same day. President Jokowi and Vice President Ma'ruf Amin read out the composition of their cabinet in the courtyard of the State Palace. On that occasion, Jokowi presented his ministers who wore batik shirts. The Advanced Indonesia Cabinet consists of 4 coordinating ministers and 30 ministers. This cabinet underwent its first reshuffle on December 23, 2020 when Joko Widodo inaugurated six new ministers and five deputy ministers. On April 28, 2021, the president announced a second reshuffle by merging the Ministry of Education and Culture with the Ministry of Research and Technology into the Ministry of Education, Culture, Research and Technology, and forming the Ministry of Investment. On June 15, 2022, the president announced a third reshuffle by inaugurating two new ministers and three deputy ministers. Background Prior to the announcement of the cabinet, Jokowi stated that the cabinet consisted of 45% from political parties and 55% from professionals; have ministers "who are 25, under 30, and under 35 years old"; who filled the old ministry positions; and not from a political party; and the attorney general who was elected from outside the political party. Jokowi also stated that the cabinet consisted of a regional head as well as old ministers who were retained, swapped positions and were dismissed. The party leader and the fifth former president of Indonesia, Megawati Soekarnoputri from the Indonesian Democratic Party of Struggle (PDIP) as the party that won the 2019 Indonesian legislative general election as well as Jokowi's party has asked for the most ministerial seats and the chair of the DPR for PDIP cadres. Jokowi admitted that he considered regional factors, religion, gender, social organization background, and age in determining ministerial candidates. Jokowi then stated that non-parliamentary coalition political parties such as the Indonesian Solidarity Party (PSI), the Indonesian Justice and Unity Party (PKPI) ), the Crescent Star Party (PBB), the Indonesian Unity Party (Perindo) and the People's Conscience Party (Hanura) will be given the option of deputy ministerial positions. At the time of the cabinet announcement, there were 17 new ministers from political parties. At the inauguration of the Advanced Indonesia Cabinet, Jokowi advised the elected ministers, one of which was to emphasize not corruption.

The following are the ministers of the Advanced Indonesia Cabinet.

For ministerial positions, the composition of political parties compared to non-political parties is 19 versus 15 as of July 1, 2022, with the following details. Note: Minister-level officials and heads of non-ministerial institutions are not included in this list.

The following are ministerial-level officials in the Advanced Indonesia Cabinet:

The composition of the political parties from which the deputy minister originates is as follows.

On December 22, 2020, President Joko Widodo announced a cabinet reshuffle in the composition of the Advanced Indonesia Cabinet by replacing six ministers. They were sworn in on December 23, 2020. Tri Rismaharini, Mayor of Surabaya replaces Me