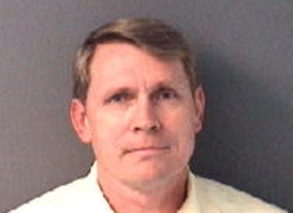 Kent E. Hovind (born January 15, 1953) is an American evangelist who advocates "Young Earth Creationism". Hovind often speaks in the field of creation science and aims to convince listeners to reject the theory of evolution and accept his explanations of science and creation in the Hebrew Bible and the Old Testament in the Christian Bible. Hovind's views are often cited as incorrect against scientific evidence. Hovind founded Creation Science Evangelism (CSE) in 1991, and frequently speaks on the topic of Young Earth creationism at seminars in private schools, churches, and takes part in live debates as well as on television and radio broadcasts and live streaming. During January 2007 to July 2015, Hovind served prison terms after being found guilty of 58 federal charges, including 12 tax misconduct, one count of obstruction of federal agency, and 45 counts of structuring financial transactions. A number of these charges were later withdrawn by the prosecutor and canceled by the judge because of the error of the accusation.

On February 9, 1969, at the age of 16, Hovind became a born-again Christian. In 1971, graduated from East Peoria Community High School. He earned three bachelor's degrees in Christian education (1974, 1988, 1991) from unaccredited institutions. In 1989, he moved to Pensacola, Florida from Illinois with his wife, and has three grown children and five grandchildren. Since 1999, one of his sons, Eric Hovind, has traveled and given presentations on creation using his father's arguments in various seminars. Between 1975 and 1988, Hovind was assistant pastor and teacher at three private Baptist schools, including the one he started, resulting in he is not required to have teaching credentials or accreditation qualifications. In 1991, Hovind founded "Creation Science Evangelism". In 1998, Hovind created the Dr. Dino and began producing articles and selling videotapes, books and fossil replicas. Prior to his imprisonment, Hovind spoke at many churches, schools, universities and other gatherings. Hovind also broadcasts daily radio talk shows over the internet and founded "Dinosaur Adventure Land" in Pensacola, Florida, Florida.

After graduating high school in 1971 from "East Peoria Community High School" in East Peoria, Illinois, from 1972 to 1974, Hovind attended "Midwestern Baptist College" and earned a "Bachelor of Religious Education" degree. In 1988 Hovind earned a "Master" degree, and in 1991 a "Doctorate" degree by correspondence from "Patriot University" in Colorado Springs, Colorado (now "Patriot Bible University" in Del Norte, Colorado, which no longer has this program). Against criticism of his education and qualifications, Hovind says his critics use the "ad hominem" argument (attacking the reporter if he doesn't like the news), and Patriot University makes similar comments.

Kent Hovind started "Creation Science Evangelism" (CSE) in 1991 although preparations had started since 1989, to bring the gospel to people through the teaching of creationism. The Federal Government said his organization did not have enough licenses to become a non-profit organization so Hovind was deemed to have reneged on tax payments which led to him being tried as a criminal in 2006 and sentenced to 10 years in prison. In May 1999, Eric Hovind, son of Kent Hovind, joined "Creation Science Evangelism" and Hovind's daughter, Marlissa, attended training to become its secretary. When in January 2007, Kent Hovind was sentenced to 10 years in prison on 58 counts