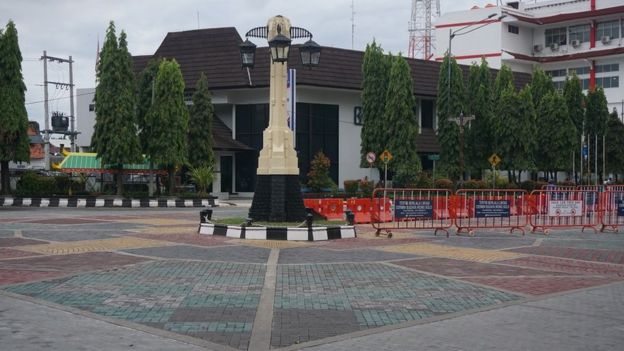 Surakarta (Javanese: , translit. Surakarta, Javanese pronunciation: [surɔˈkart̪ɔ]) or Solo (Javanese: , translit. Sala, Javanese pronunciation: [sɔlɔ]) is a city in Central Java, Indonesia, with a population of 522,364 people (2020) and a density of 11,861.00/km2. The city with an area of ​​44.04 km2 is bordered by Karanganyar and Boyolali regencies in the north, Karanganyar and Sukoharjo regencies in the east and west, and Sukoharjo regency in the south. This city is also the third largest city in the southern part of the island of Java after Bandung and Malang by population. The east side of the city is crossed by a river that is immortalized in one of the keroncong songs, Bengawan Solo. Together with Yogyakarta, Surakarta is the heir to the Islamic Mataram Kingdom which was divided through the Giyanti Agreement, in 1755. This city belongs to the Solo Raya area.

"Sala" was one of three hamlets chosen by Sri Susuhunan Paku Buwana II on the advice of Tumenggung Hanggawangsa, Tumenggung Mangkuyudha, and the commander of the Dutch troops, J.A.B. van Hohendorff, when he was about to build a new palace, after the succession war of Islamic Mataram took place in Kartasura. Over time, because the pronunciation of "Sala" was considered difficult by the Dutch, the name was changed to "Solo". The name "Surakarta" was given as a "graduation" name for the Keraton Surakarta, the new administrative center of the Islamic Mataram Sultanate in the village of Sala. At present, the name Surakarta is used in formal-government situations, while the name Sala/Solo refers more to general mentions that are motivated by cultural aspects. The word Sura in Javanese means "courage" and karta means "prosperous"; with the hope that Surakarta becomes a place where its inhabitants are people who always dare to fight for the good and prosperity of the country and nation. It can also be said that the name Surakarta is a pun from Kartasura. The word sala, the name used for the village where the new palace was built, is the name of a sacred tree from India, namely the sala tree Shorea robusta). In modern Javanese script, it is written or .

The existence of this city began when Sinuhun Paku Buwana II, the king of the Islamic Mataram Sultanate, moved the position of king from Kartasura to Sala Village, a village not far from the shores of Bengawan Solo, because Kartasura's palace was destroyed due to rebel attacks. Sunan Pakubuwana II bought land from the head of Sala Village, Kyai Sala, for 10,000 ringgit (Dutch guilders) to build the new Mataram palace. Officially, the new Islamic Mataram palace was named Karaton Surakarta Hadiningrat and began to be occupied on February 20, 1745. The Giyanti Agreement signed by Sinuhun Paku Buwana III, the Netherlands, and Prince Mangkubumi on February 13, 1755 divided the Mataram area into two, namely Kasunanan Surakarta and Yogyakarta Sultanate. Furthermore, the Surakarta Sunanate area was decreasing, because the Salatiga Agreement which was held on March 17, 1757 caused Raden Mas Said to be recognized as an independent prince with a duchy status, which was called the Kadipaten Mangkunegaran Surakarta (Pura Mangkunegaran Surakarta). As the ruler of Mangkunegaran, Raden Mas Said holds the title of Adipati Mangkunegara I.

After the founding of the Republic of Indonesia on August 17, 1945, on September 1, 1945 Sinuhun Paku Buwana XII issued a notice that Nagari Surakarta Hadiningrat supported and was behind the government of the Republic of Indonesia. For 10 months, Surakarta had the status of a special region at the provincial level, known as the Special Region of Surakarta. The status of the Special Region of Surakarta is legally regulated in Government Decree no. 16/SD 1946 and