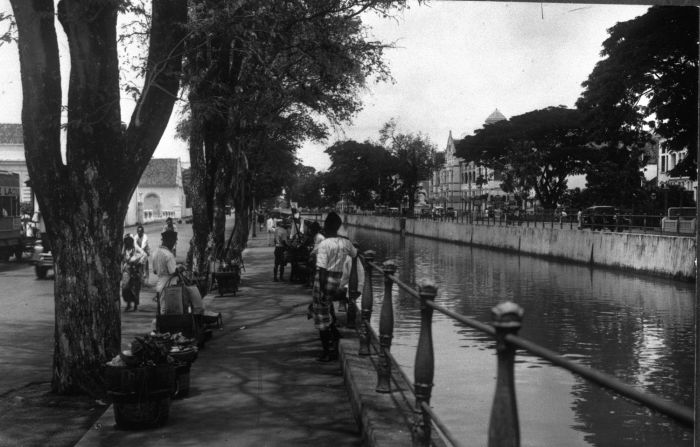 Molenvliet is a canal and the name of the area around the canal in Batavia, Dutch East Indies, which later became part of Jakarta, Indonesia. After the early 1960s, this area became known as Jalan Gajah Mada and Jalan Hayam Wuruk. Built under the leadership of a Chinese captain named Phoa Beng Gan in the 17th century to drain the swamps south of Batavia, the Molenvliet canal was then fed by the Ciliwung and Kali Krukut schools. This area connects Oud Batavia (Old Town) and Weltevreden (Field Banteng and Monas) and becomes a commercial and elite residential area.

Batavia in the 17th century was a lowland surrounded by swamps which often overflowed into floods during the rainy season and became a hotbed of diseases such as malaria. The Chinese people there at that time led by their captain, Phoa Beng Gan, worked together to build a canal to carry water from there to the sea. In accordance with the name of the creator, this canal was named Bingamvaart which was later renamed in 1661 to Molenvliet. The name molenvliet comes from the words molen which means 'wheel' and vliet which means 'flow'. On the right side of the canal, there are many sugar mills, wine production, and gunpowder factories equipped with waterwheels. Therefore, this area is called Molenvliet or "Windmill Stream".

In addition to preventing flooding, the Molenvliet canal was made to be a means of transporting wood, bricks, and other materials for the construction of luxury Dutch homes. In addition, this canal is also used to transport daily necessities such as merchandise, agricultural products, and also plantations. In 1661, the VOC raised the Molenvliet water current to drive the milling business. The regulation of water discharge in this canal is assisted by the Gunung Sahari Canal. The width of the canal is about 15 meters with an initial design of 25 meters with a dike of 3 m × 2 m. Until the 1950s, the water flowing along the Molenvliet canal was still clear so it was used for washing clothes, bathing, and defecating. This area was once known as the stage of bathing beauties because among the residents who bathe, there are those who do not wear clothes. In this area also often held various performances such as boat parties (peh cun) at night accompanied by tanjidor and cokek dance.

In the 18th century, many Dutch officials and nobles built out-of-town houses (buitenverblijven) in the Molenvliet area. One of them was Reinier de Klerk, Governor General of the VOC in 1777-1790 who built a villa or house measuring 27,000 square meters in 1760. In 1925, the building became the National Archives Building and only 9,000 square meters remained. Near the National Archives Building, there is a small street called Jalan Kesejahteraan. Previously, this street was called Gang Madat because the area was a center for the opium trade as well as a prostitution area. Other historical buildings built along this area were the first gas factory in Batavia, which is located at Gang Ketapang, Harmonie Building, Ernst Hotel, and Hotel des Indes. Ernst Hotel located at the end of Jalan Hayam Wuruk (Molenvliet Oost) is a building belonging to the Governor General of the VOC in 1761-1775 named PA van de Parra. In 1890, the hotel changed its name to Hotel Wisse until it was demolished in 1920. Some important buildings that are also no longer left are the menswear shop "Bazar" on Jalan Gajah Mada, Marine Hotel at the end of Molenvliet West, Toko Van Arken & Co. ., and the Eigen Hulp shopping center. The Van Arcken & Co shop, which sells luxury gold, silver and gems, was first established in 1861 near the Harmoni Building. There is also a branch office of Factorij or NHM (Dutch: Nederlandsche Handel-Maatsc