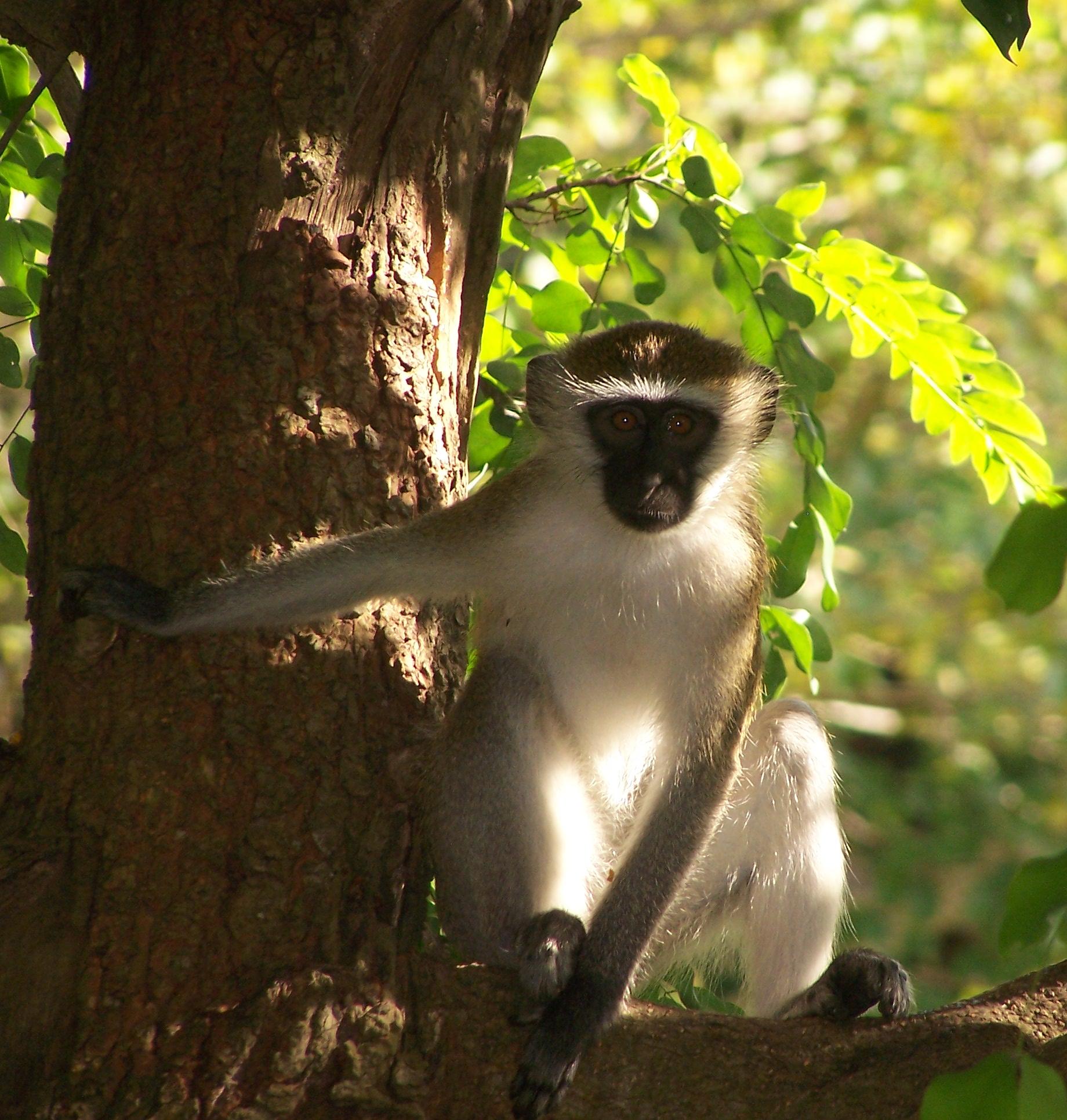 The vervet monkey (Chlorocebus pygerythrus), or simply the vervet, is an Old World monkey of the Cercopithecidae family native to Africa. The term "vervet" is also used to refer to all members of the genus Chlorocebus. Five distinct subspecies can be found commonly in South Africa, and in some eastern countries. Vervet monkeys were moved to the islands of Barbados, Saint Kitts, and Nevis along with the African slave trade. The generally herbivorous monkey has a black face and gray coat color, ranging in height between 19 inches (50 cm) for males and about 16 inches (40 cm) for females. As well as being the subject of interesting research on behavior in natural populations, the vervet monkey serves as a model for non-human primates for understanding the social and genetic behavior of humans. They have been known to have human-like characteristics, such as hypertension, anxiety, and social and alcohol dependence. Vervet monkeys live in social groups of 10-50 individuals, with males changing groups as they reach sexual maturity. Important research has been done on vervet monkeys with regard to their communication and warning calls, particularly with regard to fraternity and group recognition and sightings of certain predators.

The vervet monkey was previously classified as Cercopithecus aethiops. The vervet and malbruck are often considered conspecific, or as subspecies of the grivet. The five different subspecies of the vervet monkey are: Chlorocebus pygerythrus excubitor C.p. hilgerti from southern Kenya C.p. nesiotes C.p. pygerythus from South Africa, Botswana, Lesotho and Swaziland C.p. rufoviridis from Mozambique and Uganda has a distinguishable reddish tail that darkens towards the tail.

C.p. pygerythrus, as Cercopithecus aethiops, was also divided into four subspecies: C. a. pygerythrus, from South Africa (Western Cape, Eastern Cape, Northern Cape and southern KwaZulu-Natal), and Lesotho; is said to have pale limbs and white hands and feet (although the hands are also said to be black with scattered gray hair), and a shiny gray body color. a. cloetei, from northern KwaZulu-Natal, Swaziland and northern South Africa; darker, with a grayish-brown patch and dark legs. C. a. marjoriae, from southern Botswana and the North West Province of South Africa; pale (light gray). C. a. ngamiensis, from north-eastern Botswana and the Okavango; has paler legs and a yellow back and a darker tail (especially at the tip) than the southern vervet. All these species are no longer recognized and are synonymous with C. p. pygerythrus.

Intra-group and inter-group social behavior When males reach sexual maturity, they move to neighboring groups. Occasionally, males will move in with brothers or peers, perhaps for protection against aggression by males and females from the new flock. Groups that previously had males that were p