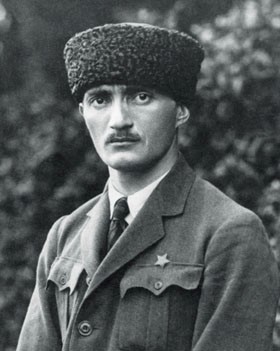 Nestor Apollonovich Lakoba (1 May 1893 – 28 December 1936) was a prominent Abkhaz communist leader. Lakoba took part in building Bolshevik power in Abkhazia after the Russian Revolution. Lakoba later served as leader of Abkhazia after the Bolsheviks won victory in 1921. When Lakoba came to power, Abkhazia was initially granted special status within the Soviet Union as the Abkhaz Soviet Socialist Republic. Although on paper it was part of the Georgian Soviet Socialist Republic with special status, the Abkhaz SSR was effectively a separate republic from Georgia. This could happen because of Lakoba's closeness to Joseph Stalin. Lakoba succeeded in resisting collectivization in Abkhazia, although as a result Lakoba was forced to accept the withdrawal of Abkhazia's special status, so that its status was changed to an autonomous republic within the Georgian SSR. Lakoba is very popular in Abkhazia because it is considered the people. Lakoba became close friends with Stalin, who frequently vacationed in Abkhazia in the 1920s and 1930s. This closeness makes Lakoba an opponent of Lavrentiy Beria. Beria was one of Stalin's closest people, in charge of the Transcaucasian Soviet Federative Socialist Republic, which also included Georgia. When Beria visited Tbilisi in December 1936, Lakoba was killed by poisoning. This allowed Beria to establish her power in Abkhazia and Georgia. Beria then designated Lakoba and his family as enemies of the state. The name Lakoba was only restored after Stalin's death in 1953. Today Lakoba is considered a national hero in Abkhazia.

Nestor Lakoba was born in the village of Lykhny, then part of the Sukhum Okrug, Kutais Governorate, Russian Empire (now Abkhazia). Lakoba has two brothers, Vasily and Mikhail. Lakoba was born into a farming family. His father, Apollo, died before Lakoba was born. Mikhail Bgazhba, who later became First Secretary of the Abkhaz Communist Party, stated that Apollo Lakoba was shot dead for opposing the aristocrats and landowners on his territory. Lakoba's mother remarried twice, but both husbands also died. From the age of 10 to 12, Lakoba attended New Athos, then two years later he attended Lykhny. He then enrolled in the Tbilisi Seminary in 1905. However, he was not interested in studying religion. Lakoba read forbidden books at that time and was often caught by the school. Lakoba is deaf, so he has to use a hearing aid for the rest of his life. This is a hallmark of Lakoba which has earned him the nickname "The Deaf" by Joseph Stalin. In 1911, Lakoba was expelled from the seminary for his involvement in revolutionary activities. Lakoba eventually moved to Batumi which at that time was the main port for exporting oil from the Caucasus. He studied self-taught to take the gymnasium exam. While in Batumi, Lakoba began to make contact with the Bolsheviks. Lakoba began working with them in the autumn of 1911 and officially joined in September 1912. Lakoba was then involved in propaganda actions against workers and farmers in Adjara and its surroundings. Lakoba then developed his ability to organize the masses. Lakoba was forced to leave Batumi in 1914 after his actions were discovered by the police and then moved to Grozny which is an oil-producing city in the Caucasus. Lakoba continued his efforts to spread Bolshevik propaganda among the local populace. Lakoba continued his studies in Grozny and then passed his examinations in 1915. The following year, Lakoba studied law at the University of Kharkov in what is now Ukraine. However, due to the First World War and its impact on Abkhazia, Lakoba was forced to stop advancing