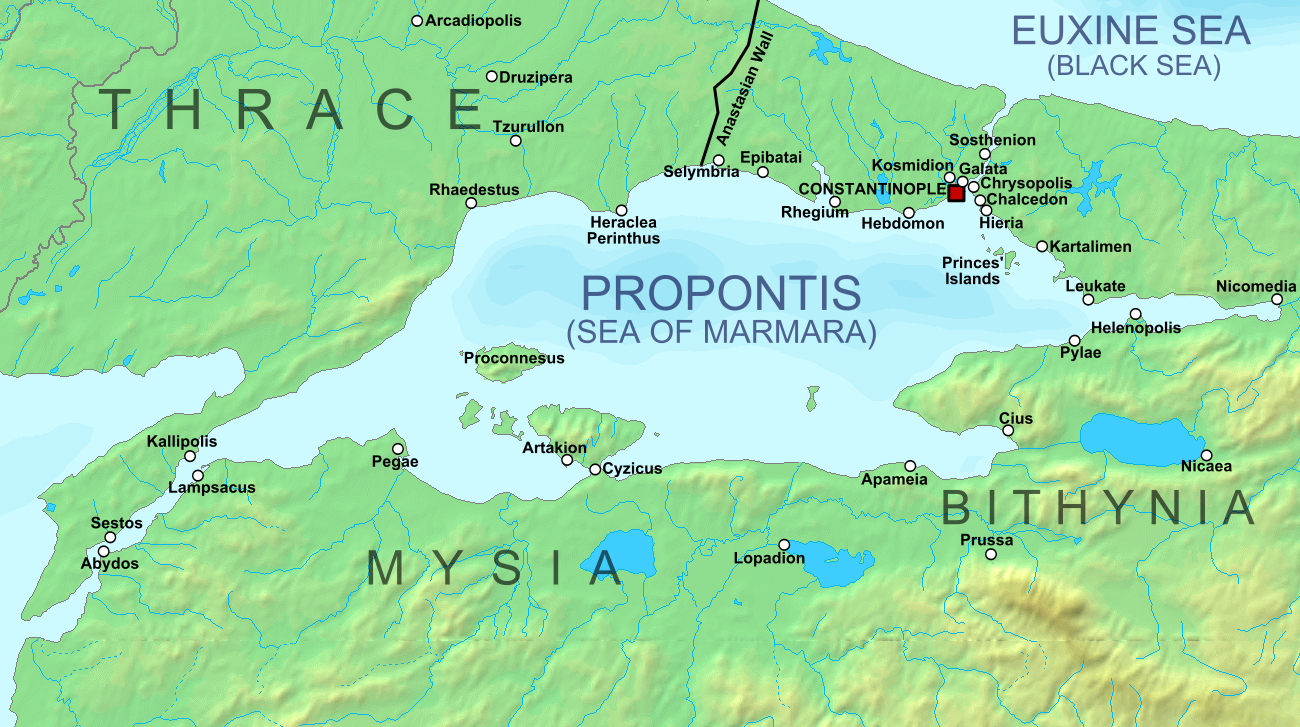 The Second Arab Siege of Constantinople in 717–718 was a combined land and sea effort by Arab armies of the Umayyad Caliphate against the capital of the Byzantine Empire, Constantinople. This effort marked the culmination of twenty years of gradual Arab incursions, disturbances, and occupations of the Byzantine frontier, while Byzantine power was weakened by prolonged domestic turmoil. In 716, after years of preparation, Arab forces, led by Maslamah bin Abdul Malik, invaded Byzantine Asia Minor. Although at first they wanted to take advantage of the Byzantine civil war and make a deal with Leo the Isaurian general, who rose against Emperor Theodosius III, Leo instead outwitted the Arabs and usurped the Byzantine throne for himself. After wintering on the west coast of Asia Minor, Arab armies crossed into Thrace in early summer 717 and established a siege line to blockade the city, which was protected by the great Theodosius Wall. The fleet of Arab ships, accompanying land troops and intended to complete the blockade of the city by sea, was repelled shortly after its arrival by a Greek fire attack from the Byzantine navy, allowing Constantinople to obtain food supplies by sea, while the Arab forces suffered from famine and disease in the next harsh winter. In the spring of 718, two Arab fleets sent as reinforcements were destroyed by the Byzantines after a Christian crew defected, and an additional army sent overland through Asia Minor was ambushed and defeated. With additional attacks from the Bulgars from behind, the Arabs were finally forced to stop the siege on August 15, 718. On their return journey, the Arab fleet was nearly destroyed by a natural disaster. The failure of this siege had far-reaching repercussions. The rescue of Constantinople ensured the survival of Byzantium, while the view of the Caliphate's strategy was changed: although regular attacks on Byzantine territory continued, the goal of conquest was immediately abandoned. Historians refer to this siege as the event that stopped Islam's advance into Europe, and consider it one of the most decisive battles in history. Background After the First Arab Siege of Constantinople (674–678), both Arabs and Byzantines went through a period of peace. After 680, the Umayyad Caliphate experienced the Second Islamic Civil War followed by a Byzantine revival that took place in the East which allowed the Byzantines to draw large amounts of tribute from the Umayyad government in Damascus. In 692, after the Umayyads succeeded in ending the Muslim Civil War, Emperor Justinian II (r. 685–695 and 705–711) again sparked hostilities with the Umayyads. The result was a series of Arab victories that led to the loss of Byzantine control of Armenia and the principalities of the Caucasus, and the gradual disruption of Byzantine territory. From year to year the generals of the Caliphate, usually members of the Umayyad family, launched raids into Byzantine territory and captured forts and cities. After 712, the Byzantine defense system began to show signs of collapse: as time went on, the Arab invasions penetrated deeper and deeper into Asia Minor, the border forts were repeatedly attacked and looted, and the Byzantine reaction grew weaker and weaker. In this endeavor, the Arabs were helped by a prolonged period of domestic instability, which followed the first overthrow of Justinian II in 695. During this period, the Byzantine throne changed hands seven times in violent revolutions. Nonetheless, as the Byzantine scholar Warren Treadgold noted, "Arab attacks intensified after the end of the civil war, however." with zeal