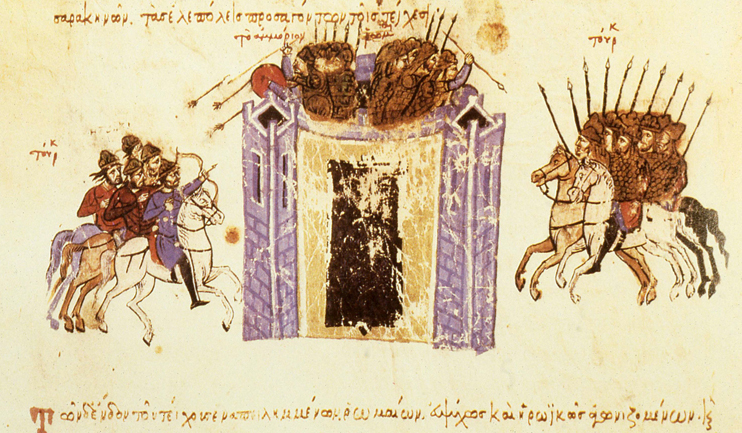 The sack of Amorion (called Ammuriyah in Muslim sources) carried out by the Abbasid Caliphate in mid-August 838 was one of the most important events in the history of the Arab-Byzantine Wars. The Abbasid army was led directly by Caliph al-Mu'tashim (r. 833–842) and aimed to avenge the attack by the Byzantine Emperor Theophilos (r. 829–842) on the caliphate's borders the year before. Caliph al-Mu'tashim attacked Amorion, a Byzantine city in western Anatolia, because it was the birthplace of the Byzantine dynasty and one of the largest and most important cities in Byzantine territory at that time. The caliph managed to gather a large army, which he then divided into two. The two armies then invaded from the northeast and south. The northeastern forces defeated the Byzantine forces led by Theophilus in Anzen, and the Abbasids were able to enter the interior of Asia Minor and gather at Ankira, which they found abandoned. After looting the city, they moved south towards Amorion. They arrived in the city on August 1. Theophilus himself was unable to send reinforcements to Amorion due to the conspiracy in Constantinople and the rebellion of the Khurramiyah contingent. Amorion had a very strong defense, but there was a traitor who leaked information about the weak points in the city walls, so the Abbasids concentrated their attacks on that place and managed to break through the city's defenses. Boiditzes who was the commander on the side of the wall then tried to negotiate with the Abbasids without notifying his superiors first. He then agreed to a truce and left his place of duty, so that the Abbasid troops could enter the city of Amorion and take it. Amorion was then destroyed and could not rise again like before. Many of its citizens were massacred and the rest enslaved. Most of the survivors were eventually released after an armistice was agreed in 841. However, important officials were taken to the Abbasid capital of Samarra and several years later executed for their refusal to convert to Islam. Since then, they have been known as the 42 Martyrs of Amorion. This incident was also the subject of Abu Tammam in making a Praise about the Conquest of Amuriyyah (Arabic: اسبة ) and used as a means to legitimize power by Al-Mu'tashim. The conquest of Amorion was not only disastrous for Theophilus, but traumatized the Byzantine people, as can be seen in the literary works written after him. This looting did not change the balance of power between the Byzantines and the Abbasids. Gradually, Byzantium actually strengthened. However, the biggest impact of this event can be viewed from a religious perspective. Emperor Theophilus strongly supported iconoclasm (rejection of images in religion) which was believed to have blessed Byzantium with a resounding victory. This looting undermined that belief, and the fall of Amorion became an important factor in pushing people away from iconoclasm after Theophilus' death in 842. Background In 829, when the young emperor Theophilus (b. 813) rose to power in Byzantium, his country had fought numerous wars against the Islamic caliphate for nearly two centuries, although peace had been maintained for nearly twenty years due to civil wars raging in the Abbasid Caliphate. At the time of Theophilus' ascension to the throne, the Muslims continued their offensive in the east under the leadership of Caliph al-Ma'mun (r. 813–833). Meanwhile, to the west, Muslim armies succeeded in conquering Sicily gradually from Byzantine hands since 827.