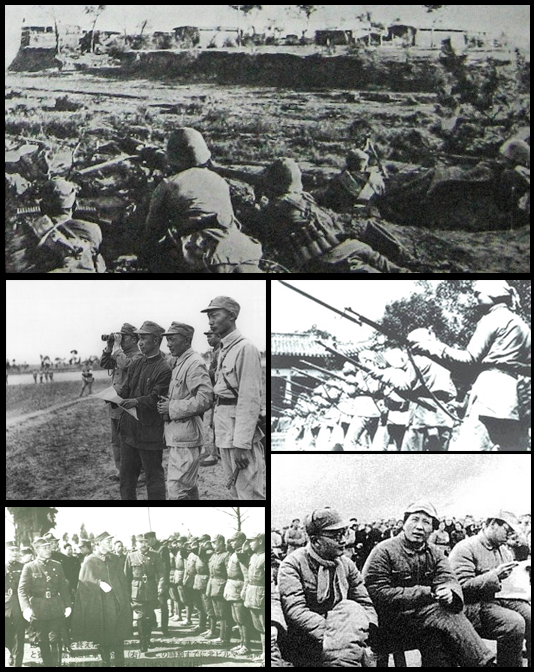 The Chinese Civil War (simplified Chinese: ; traditional Chinese: ; pinyin: Guó-Gòng Nèizhàn) was a civil war in China fought between forces loyal to the Kuomintang-led government of the Republic of China (KMT), and forces loyal to the Chinese Communist Party (CCP). The war began in August 1927, coinciding with the Chiang Kai-Shek Northern Expedition, and essentially ended when the main active fighting ceased in 1950. This conflict eventually resulted in two de facto states, the Republic of China in Taiwan and the People's Republic of China in China. mainland, each officially claiming to be the legitimate government of China. This war represented an ideological split between the Communist Party of the CCP and the Nationalist KMT, which lasted intermittently until late 1937, when the two sides united to form the Second United Front to resist the Japanese invasion and prevent the Japanese from extending the earlier invasion of Manchuria. in 1931. The full-scale Chinese Civil War resumed in 1946, a year after the end of fighting with Japan. Four years later there was a major military truce, with the newly established People's Republic of China controlling mainland China (including Hainan) and the Republic of China's jurisdiction being limited to Taiwan, Penghu, Kinmen, Matsu and some outlying islands. To date no ceasefire or peace treaty has been signed, and there is debate over whether the civil war has officially ended. Cross-Strait relations have been hindered by military threats and political and economic pressure, particularly over Taiwan's political status, with both governments officially adhering to the "One China policy". The People's Republic of China still actively claims Taiwan as part of its territory and continues to threaten the Republic of China with military invasion if the Republic of China officially declares independence by changing its name and gaining international recognition as the "Republic of Taiwan". Instead, the Republic of China retaliated by claiming mainland China, and the two of them continued to fight for diplomatic recognition. At present the war seems to be happening on the political and economic fronts in the form of cross-strait relations; however, these two separate de facto countries have close economic ties.