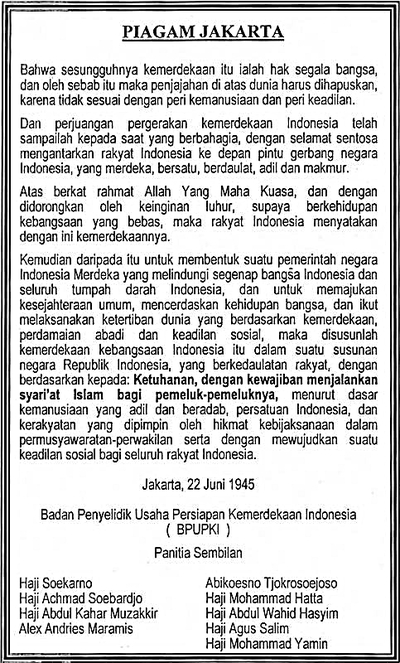 Jakarta Charter during the formulation of the 1945 Constitution

First Official Session of BPUPK and Committee of Nine

In 1942, the Japanese Empire occupied the Dutch East Indies. Since the beginning of the occupation, the Japanese military government has cooperated with the leaders of the national groups with a view to meeting the needs of war and occupation. In order to maximize cooperation with national groups in Java, the Japanese formed the Jawa Hokokai organization in early January 1944, and this organization was a replacement for the People's Power Center which had been disbanded. When Japan began to experience defeat in the Pacific War, Japanese Prime Minister Kuniaki Koiso promised to give independence to all Indonesians one day. On March 1, 1945, the 16th Army, the Japanese military corps that exercised government over the Java region, formed the Investigation Agency. Efforts to Prepare for Independence (BPUPK, Japanese: Dokuritsu Junbi Chōsa-kai). This agency is tasked with establishing the basis of the Indonesian state and formulating its constitution. The BPUPK consists of 62 members, of which 47 are from the national group and 15 from the Islamic group. Representatives of Islamic groups believe that Indonesia's constitution should be based on sharia. The BPUPK held its first official session in Jakarta from May 29 to June 1, 1945. In this session, Soekarno delivered his famous speech, "The Birth of Pancasila", on June 1, 1945. This speech made Pancasila the basis of the Indonesian state, with "divinity". as the fifth precept. Regarding this precept, Soekarno explained: Before entering the recess period, BPUPK formed a Small Committee consisting of eight members with Soekarno as the chairman. This committee is tasked with collecting proposals