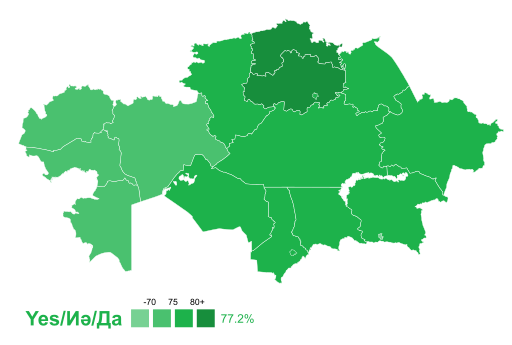 The constitutional referendum in Kazakhstan, locally known as the Republican Referendum (Kazakh: еспубликалық еферендум; Russian: еспубликанский еферендум), was held on 5 June 2022. This is the third referendum since independence from the Soviet Union, and the first since the 1995 referendum establishing the current constitution. this. The amendments followed violent civil unrest in early January caused by deteriorating economic conditions and subsequent calls for rapid political reform. This amendment amends 33 articles, accounting for a third of the total changes in the constitution. Political commentators believe that this amendment will reduce the influence of executive powers, give more powers to Parliament, and remove the powers that had been retained by former president Nursultan Nazarbayev after stepping down from office in 2019. President Kassym-Jomart Tokayev first unveiled the proposed amendments. during the initial State of the Union Address in March 2022. Following the announcement from Tokayev, he then formed a working group on forming proposals for constitutional amendments together with Parliament and in April 2022, the proposed constitutional amendments were then submitted to the Constitutional Council for approval. During the drafting of the amendments, several controversial changes were proposed by Kazakh MPs and officials regarding the abolition of Russian as the official language which was originally used together with Kazakh. And most importantly, the initial application to grant former president Nazarbayev a new honorary title as "founder of an independent Kazakhstan", along with other privileges, faced public backlash and was eventually dropped. On April 29, President Tokayev put forward the idea of ​​holding a Republican Referendum to approve changes and additions made to the constitution. In early May, Parliament adopted a draft package of amendments and additions to the constitution. After Parliament approved the final revisions on 5 May, Tokayev approved the draft and fixed the date of the referendum in a presidential decree. Throughout the campaign, the amendments and holding of the referendum were supported by various pro-government political parties, state institutions, NGOs, public figures and statesmen, including former president Nazarbayev himself. Although there was no concerted campaign against the referendum, civic activists and opposition groups criticized the referendum for the financial factors of the referendum, the short timeframe for the campaign, and the lack of dialogue between the Kazakh government and citizens during its preparation. Critics argue that these amendments will only slightly change the domestic political situation of Kazakhstan and will instead increase the potential ambitions of President Tokayev's second term. nationally as well as in two thirds of the 17 autonomous regions and municipalities, and a turnout of at least 50% of registered voters. The Central Election Commission (OSK) on the evening of 5 June reported an early turnout of 68.4% shortly after voting closed. The exit poll, which was published in the mass media at midnight on June 6 during coverage of the referendum, showed that more than 74% of Kazakhs supported constitutional changes. The next morning, OSK announced that voters approved 56 amendments to the Constitution of Kazakhstan, with 79.2% of voters in favor and 19.2% against.