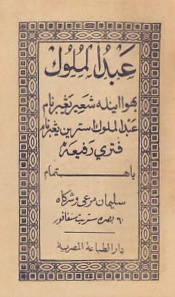 Sjair Abdoel Moeloek (EYD: Syair Abdul Muluk) is an 1847 poem that according to some sources was composed by Raja Ali Haji or his daughter, Saleha. This verse tells of a woman who disguises herself as a man to free her husband from the Sultan of Hindustan; The Sultan captured him in an attack on their kingdom. This book with the theme of gender disguise is considered to reorganize the hierarchy of men and women as well as royalty and servants. This theme is often found in contemporary Javanese and Malay literature. Sjair Abdoel Moeloek has been reprinted and translated many times. This poem is often used in stage plays and is the basis for Lie Kim Hok's Sair Tjerita Siti Akbari.

Abdul Muluk was the son of Abdul Hamid Shah, Sultan of Barbari. Raised in a noble family, when he was young he married Siti Rahmat. After the death of his father, Abdul Muluk ascended the throne. Soon he left Barbari to travel the world and handed over control of the empire to his uncle, Mansur. Finally Abdul Muluk arrived in Ban, and fell in love with the daughter of the sultan of Ban, Siti Rafiah. The two of them got married. Six months later, Abdul Muluk left Ban with his wife. On arrival at Barbari, they were warmly welcomed. Siti Rahmat and Siti Rafiah get to know each other and live life like brothers and sisters. Abdul Muluk spends his days with his two wives. Siti Rafiah soon became pregnant. Unfortunately, their happiness did not last long. The sultan of Hindustan attacked without making a declaration of war to avenge his uncle's death. The palace guards and advisors were massacred, while Siti Rahmat and Abdul Muluk were taken prisoner. Siti Rafiah managed to escape. Six months later, Siti Rafiah met a sheikh who gave her shelter. After giving birth, Siti Rafiah decided to avenge her husband's detention. He allowed his son, Abdul Ghani, to be raised by the sheikh and disguised himself as a man named Dura. Upon arriving at the Barbaham sultanate, he saw that the sultanate was unstable. The rightful sultan, Jamaluddin, was ridden by his uncle, Bahsan. Disguised as Dura, Siti Rafiah also helps Jamaluddin establish his authority. With the help of Barbaham's troops, Siti Rafiah attacked Hindustan. The Sultan of Hindustan was arrested and Abdul Muluk and Siti Rahmat were released. Siti Rafiah then reveals her true identity and meets her husband again. Abdul Ghani, who is seven years old, left the sheikh's house to look for his parents. When he is accused of stealing from an inn, a passerby saves him. Abdul Ghani then lived with him. Because he had injured a slave, Abdul Ghani was brought before Sultan Ban who realized that the child was his grandson. The sheikh was also made Ban's religious leader. After the sultan died, Abdul Ghani became his successor.

The theme of women disguised as men for war, as contained in Sjair Abdoel Moeloek, is found in many Malay and Javanese literature, including the stories of Pandji from Java and hikayat and syair from Malaya. Other examples are the Tale of Panji Semirang, the Tale of Jauhar Manikam, and the Poem of Siti Zubaidah of the Chinese War. The latter work has a similar plot to Sjair Abdoel Moeloek's, but because Siti Zubaidah's Chinese War poem is undated, it is impossible to determine which work was composed first.