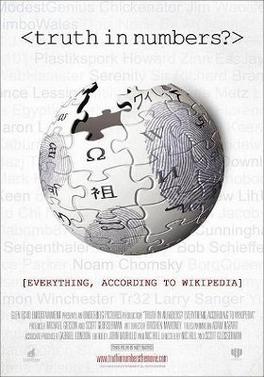 Truth in Numbers? Everything, According to Wikipedia is a 2010 American documentary film exploring the history and cultural impact of Wikipedia, a user-editable online encyclopedia. This film tries to answer the question of whether only experts should be tasked with editing the encyclopedia or that everyone should do it too. This film explains the history and background of Wikipedia with comments from Wikipedia founders Jimmy Wales and Larry Sanger. Several other commentators also appear in the film, such as The Washington Post editor Len Downie, CBS journalist Bob Schieffer, former Encyclopædia Britannica editor-in-chief Robert McHenry, and former Central Intelligence Agency director James Woolsey. The documentary also discusses incidents that had a negative impact on Wikipedia, including the Essjay controversy and the Wikipedia biography controversy. The idea for the documentary was based on suggestions from film producer Michael Ferris Gibson, maker of the film 24 Hours on Craigslist. Gibson contacted director Nic Hill, and financed his trip to follow Jimmy Wales around the world. Filming began in August 2006 during the 2006 Wikimania conference. Hill traveled to China, Indonesia, India, South Africa, Australia, and Europe to interview Wikipedia contributors. Scott Glosserman was also involved in the making of this film providing creative direction. The production team focused their work on addressing how Wikipedia presents reality. The film premiered at the 2010 Wikimania conference in Gdask in July 2010. Thereafter, it was screened at New York City's Television and Radio Museum in October 2010, and at the Savannah University of Art and Design's Trutees Theater as part of the Savannah Film Festival. on November 3, 2010. In Indonesia, the film was also screened at Pacific Place Jakarta on July 28, 2012 by Wikimedia Indonesia. Truth in Numbers? received positive reviews from writers Ted Leonsis on his blog, Daniel D'Addario for his review in the publication AOL Urlesque, and Carlos Serrano in his coverage of the Savannah Film Festival.

Truth in Numbers? Everything, According to Wikipedia explores the history and cultural impact of Wikipedia. In this documentary, Wikipedia is presented as a new form of cultural communication and dialogue. The director of this film tries to answer the question, "Should you and I share the task of standardizing some human knowledge for everyone, or should we leave the task to the experts?" The film provides an overview of the history of the Wikipedia website, as well as biographical information on its founder, Jimmy Wales. Wales is seen talking about Wikipedia with a reader from India pointing out an inaccuracy in an article. Wales responded, "Change if so," and proceeded to show the reader how to click the "edit" tab on Wikipedia. Another Wikipedia founder Larry Sanger also appears in this documentary and talks critically about how Wikipedia seeks to bring together editors from the general public instead of expert contributors. The media commentators and journalists who appear and interviewed in this film are writer Howard Zinn, editor of The Washington Post Len Downie, CBS journalist Bob Schieffer, Encyclopædia Britannica chairman Robert McHenry, former director of the Central Intelligence Agency James Woolsey, Slate Magazine reporter Chris Wilson, The Register journalist Cade Metz who has written criticism of Wikipedia, Richard Branson, and Noam Chomsky. The film documents an initiative in India and Africa called the "Wikipedia Academy". The controversies discussed in this film include the Essjay controversy when