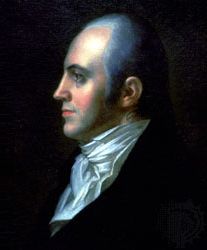 Aaron Burr (February 6, 1756 Newark - September 14, 1836 Staten Island) was an American politician and banker, a member of the Democratic-Republican Party. During his political career he held both the office of New York State Congressman and Senator, before being elected Vice President of the United States of America under the presidency of Thomas Jefferson from 1801 to 1805. Initially a member of the Federalist party, Burr passed in 1791, thanks to the influence exercised by the then Governor of the State of New York George Clinton, to the Democratic-Republican Party. During his tenure as vice president he became famous for having killed his political rival Alexander Hamilton in a duel and for being later accused of high treason, due to an alleged plan to secede some of the western territories. Released in 1807 for lack of evidence, he remains one of the most controversial characters in the history of the United States of America to this day.

Burr was born in Newark, New Jersey, in 1756 to Reverend Aaron Burr Senior, a Presbyterian minister and second president of the College of New Jersey, and Esther Edward, daughter of Jonathan Edwards, a celebrated Calvinist theologian. In 1757 his father suddenly died and a year later his mother too. Little Burr and his sister Sally, two years older, were then placed in the custody of several relatives, moving between Massachusetts, Pennsylvania and New Jersey, until they were adopted by their uncle Timothy Edwards, who took care of their growth and At the age of eleven, his uncle enrolled him at the College of New Jersey, which turned him down due to his young age. Burr then continued his studies for a further two years at his uncle's home. In 1769 his enrollment was finally accepted, and within three years he completed his studies. His time at the college decisively influenced young Burr's way of thinking: under the direction of then principal John Witherspoon, the institute had indeed established itself as one of the most radical institutions in the new world, which did not hesitate, in after increasing tensions between the English colonies and the motherland, to openly criticize the policy of the United Kingdom in North America.After graduating, Burr continued his studies in theology initially always at the College of New Jersey and later at Presbyterian pastor Joseph Bellamy, but he left after two years. He then began to study law in Litchfield following the courses taught by his brother-in-law Tapping Reeve, but stopped studying in 1775 when the American Revolution broke out.

When the War of Independence broke out in 1775, Burr joined his friend Matthias Ogden as a volunteer in the Continental Army. In September of the same year he participated in the military campaign organized by Benedict Arnold in Maine to attack the British fortress in Quebec City. The purpose of this operation was to send reinforcements to Richard Montgomery's troops, who had been victorious until then during the American invasion of Canada. After joining Montgomery's troops, Burr was promoted by Arnold's adjutant. Also in the same year, on December 31st, Burr stood out for his heroic attempt to recover the body of General Montgomery, who had fallen during the battle of Québec. This feat also earned him praise from the Continental Congress in 1776, but Burr nevertheless received no promotion.After the military campaign in Canada, Burr returned in the spring of 1776 to New York, where he was also at the time George Washington. Here he was assigned, on the recommendation of Joseph Reed, to serve under the command of Washington, but was subsequently reassigned to the general