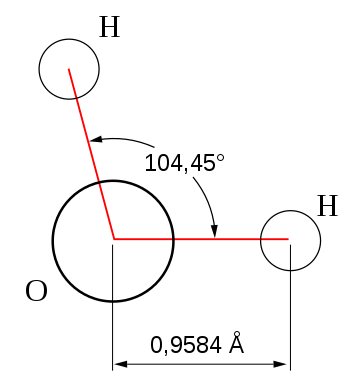 Water is a chemical compound with the molecular formula H2O, in which the two hydrogen atoms are bonded to the oxygen atom with a polar covalent bond. Under normal temperature and pressure conditions it appears as a two-phase system, consisting of a colorless and tasteless liquid (which is called "water" in the strict sense) and a colorless vapor (called water vapor). It occurs in a solid state (called ice) in the event that the temperature is equal to or lower than the freezing temperature. Since water is an excellent solvent, natural waters contain many other dissolved substances, and it is for this reason that with the term "water" commonly means both the pure chemical compound of formula H2O and the (liquid) mixture formed by it, with other substances dissolved in it. Water in nature is one of the main constituents of ecosystems and is the basis of all known forms of life, including the human being; it is also due to the very origin of life on our planet and it is also indispensable in civil, agricultural and industrial use; man has recognized its importance since ancient times, identifying it as one of the main constituent elements of the universe and attributing to it a profound symbolic value, which can be found in the main religions. On planet Earth, water covers 71% of the planet's surface and is the main constituent of the human body.

Physics and chemistry of water

The belief that water was a primitive and indivisible element lasted until the last decades of the 18th century, when scientists Lavoisier and Cavendish discovered that this substance is actually made up of two constituents: hydrogen and oxygen. In 1742, Anders Celsius defined the temperature scale that takes his name, placing the melting point of water (at normal atmospheric pressure) at 100 degrees and the boiling point at 0 degrees; in 1745, however, Linnaeus reversed it, reaching the scale as we know it today. The first breakdown of water into hydrogen and oxygen (its elementary components) was performed in 1800 by the English chemist William Nicholson, through the process of electrolysis. The water is in fact partially dissociated into H + and OH- ions, which migrate towards the two poles of the electrolytic cell, where the following reactions take place: anode (+): 4 OH- → O2 + 2 H2O + 4 e- cathode (-): 2 H + + 2 e− → H2 oxygen and hydrogen are produced in the form of gas bubbles on the surface of the electrodes, from which they can be collected. Gilbert Newton Lewis isolated the first sample of pure heavy water (in which hydrogen is replaced by its isotope deuterium) in 1933.A scientific controversy arose in the late 1960s regarding the existence of a polymeric form of ' water (the "polywater"). It is now agreed that this "polywater" does not exist. In 2007, thanks to the use of supercomputers and quantum mechanics, a numerical model of water was developed which, starting from the quantum-mechanical principles of the molecules, extrapolates its behavior in the correct way .

The physical forms of water