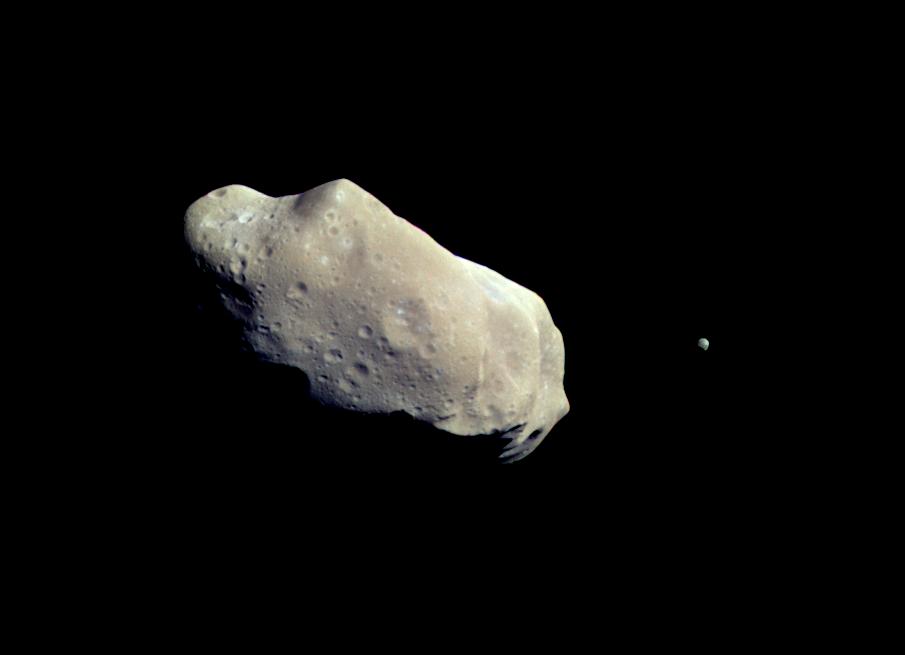 An asteroid (sometimes called a small planet or planetoid) is a small celestial body similar in composition to a terrestrial planet, generally devoid of a spherical shape, generally with a diameter of less than a kilometer, although there are also large bodies, since technically even the particularly massive bodies recently discovered in the outer solar system are to be considered as such. Asteroids are thought to be remnants of the protoplanetary disk that were not incorporated into the planets during the formation of the System. Most asteroids are found in the main belt, and some have satellite asteroids. They often have orbits characterized by high eccentricity. Very small asteroids (usually fragments resulting from collisions), with the size of a boulder or less (according to the International Astronomical Union, bodies of mass between 10−9 and 107 kg), are known as "meteoroids". Asteroids composed mostly of ice are known as comets. Some asteroids are the remnants of old comets, which have lost their ice in the course of repeated approaches to the Sun, and are now composed mostly of rock.

From 1 January 1801 in which the Italian astronomer Giuseppe Piazzi, from the Astronomical Observatory of Palermo, discovered what was then called a "little planet", very dim, orbiting in the belt between Mars and Jupiter, and which will later be classified as an asteroid, scholars try to identify the origins of individual "planetini" and families of "corpuscles" or asteroids. Taking as a reference the asteroids formed in the solar system, those close to planets such as Earth and Mars show the spectrum of rocky minerals mixed with iron, while those close to Jupiter tend to be dark and reddish, indicating a composition not very different from that of the primordial nebula, which about 4.5 billion years ago would have produced the planets to be condensed. the most accredited hypothesis, in a first phase the tiny solid bodies aggregated to form the bricks of the planets, but in the area beyond Mars, due to the effects of gravitational resonances with the mass of Jupiter were prevented from forming bodies with a diameter greater than 1000 kilometers. The corpuscles that failed to be incorporated into the forming planets became asteroids, and among them the largest reached a temperature sufficient to allow chemical differentiation; the consequence was that in some of them water was formed, in other volcanic phenomena. Thanks to Jupiter's interference on the primary orbits of the asteroids, their collisions gradually increased, which led to numerous destructions and mutilations from which the larger bodies survived, while other corpuscles were thrown out of the solar system. So some asteroids, and even meteorites, represent the remains of these protoplanets, while others, such as comets, are even more primitive bodies, which have not managed to differentiate and therefore are evidence of a very remote past, close to the origins of the system. Regarding the structure, scholars have advanced the hypothesis that alongside the typical solid and rocky conformation, asteroids larger than one kilometer are not monolithic, but rather aggregates of small fragments or even piles of fragmented stones along the lines of comets, as Don Davis and Clark Chapman first proposed.

Over 600,000 asteroids have already been numbered and cataloged in the solar system, and probably hundreds of thousands more (some estimates exceed a million) are still waiting to be discovered. The largest asteroid in the inner solar system is Ceres, with a diameter of 900-1000 km; they follow