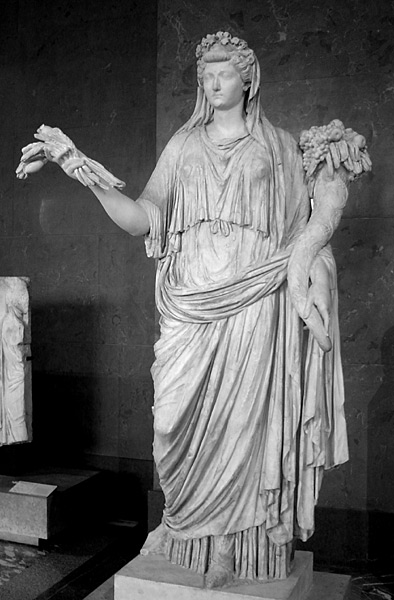 Augusta (venerable) was a Roman imperial title; it was the feminine form of the August title, and was usually attributed to the wives or relatives of the Roman emperors. Starting from the third century, it was joined by the titles Mater patriae (mother of the homeland) and Mater castrorum (mother of the camps). After their death some Auguste were granted divine honors and the title of "Diva", similar to that of "Divus" for the emperors deified with the ceremony of apotheosis. The title of august, although similar to the male equivalent, did not carry with it either the proconsular imperium or the tribunal power; these shortcomings, combined with the fact that it was difficult for a woman to carry the title of emperor (which will only happen in the Byzantine Empire, where Irene of Athens will be basileus), made it impossible for an august to exercise effective and legal power. There are only two cases in which a woman could have reigned in her own right: when Caligula, sick, designated her sister Drusilla as her successor and in the case of Ulpia Severina, according to some historians, empress for a short period after the death of her husband. Aureliano. In fact, also the mother of the young emperor Elagabalus, Giulia Soemia (who also did not have the official title), and that of Nero, Giulia Agrippina Augusta, exercised the regency during the young age of the children (Agrippina also came to mint coins during the absence of her husband Claudio in the war). Giulia Domna the mother of Emperor Caracalla, Giulia Mamea mother of Alessandro Severo and the mother of Mamea and Soemia, Giulia Mesa were also the real rulers behind the throne.

Augustae of the Roman Empire

Augustae of the Western Roman Empire

Augustae of the Eastern Roman Empire or Byzantine Empire