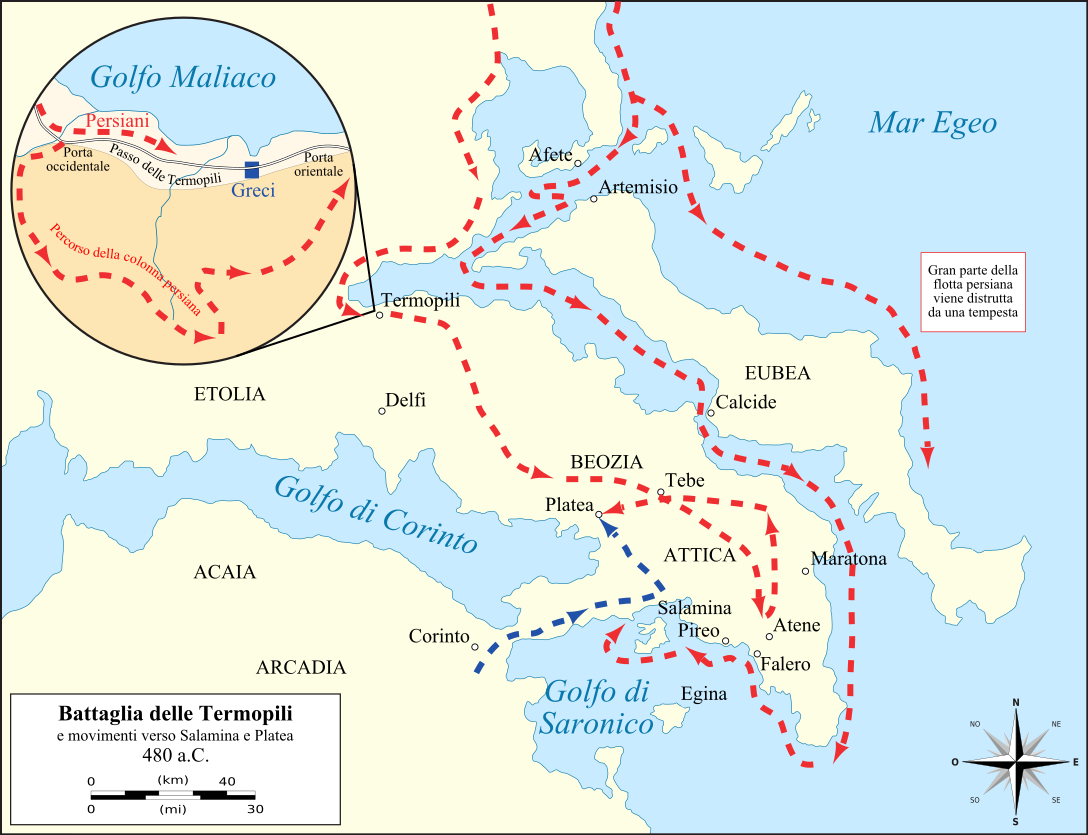 The Battle of Plataea was the decisive land battle of the Second Persian War. It was fought in August 479 BC. near the city of Plataea, in Boeotia, between an alliance of Greek city-states, including Sparta, Athens, Corinth and Megara, and the Persian empire of Xerxes I. The previous year the Persian troops, led by the Great King himself, had collected victories, sometimes paid for dearly, in the battles of Thermopylae and Artemisium and had conquered Thessaly, Boeotia, Euboea and Attica. However, in the battle of Salamis, the Greek fleet had achieved a landslide victory over the Persians, preventing them from conquering the Peloponnese. Xerxes then withdrew with most of his army, leaving his general Mardonius to overwinter in Greece to finally defeat the Greeks the following year. In the summer of 479 BC the Greeks assembled a huge army of 100,000 men and marched out of the Peloponnese. The Persians, who could count on an army two to three times the Greek one, withdrew to Boeotia and built a fortified camp near the city of Plataea. The Greeks avoided fighting in the vast terrain around the Persian camp, favorable to the enemy cavalry, and a stalemate ensued that lasted eleven days. During an attempted retreat by the Greeks, since they had been denied access to supplies, the allied host broke up, making Mardonius think that his enemies were on the run. The Persians thus pursued the Greeks, but these, in particular the Spartans, the Tegeans and the Athenians, stopped and attacked battle, turning the enemy light troops to flight and killing Mardonius. Much of the Persian army was trapped in the camp and massacred. The destruction of this army and the remnants of the Persian fleet, presumably on the same day near Mycale, ended the war. After Plataea and Mycale, a new phase of the Persian wars would begin, the Greek revival. Although the victory of Plataea was brilliant, both in antiquity and today it is not attributed the same importance as the battles of Marathon and Thermopylae.

The only primary source for the Ionian revolt is the Greek historian Herodotus. He, also called with the nickname "Father of History", was born in 484 BC. in Halicarnassus, a city at that time subjected to Persian rule. Between 440 and 430 BC he wrote the Histories (in ancient Greek: Ἰστορίαι), searching in these writings for the origins of the Persian wars, events belonging to a past not very distant from that time having ended definitively in 450 BC. Herodotus' approach to historical narration was completely new, so much so that he was recognized as the paternity of modern historiography. Many historians recognize the importance of his work: Tom Holland goes so far as to say that "for the first time a historian tried to trace the origins of a conflict so close that he was not enveloped by fabulous circumstances, by the whims and desires of some god, by the necessity of the destiny of a people, providing explanations that he can verify in person ". Starting with Thucydides, some subsequent ancient historians, while following his path, criticized his work. However Thucydides himself began his work from where Herodotus had finished his work, that is, at the siege of Sesto: it can be deduced that he presumably believed that the version of events given by Herodotus was accurate enough not to need to be rewritten or corrected. Plutarch criticized Herodotus in his work On the Malice of Herodotus, where he describes him as close to the positions of the Persians (in ancient Greek: φιλοβάρβαρος, "friend of the barbarians") and not quite philhellenic, which, however, could even demonstrate the impartiality of Herodotus and his work. Until the