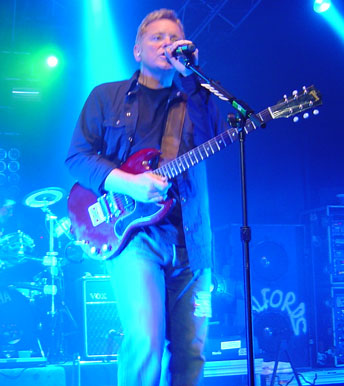 Bernard Sumner, also known as Bernard Albrecht or Bernard Dicken (Broughton, January 4, 1956), is a British guitarist, keyboardist and singer. He was in 1977 one of the two founders of the Joy Division group together with Peter Hook: in the group he will play the electric guitar and the synthesizer. Of New Order, the group born from the ashes of Joy Division, he will also be lyricist and singer. His singing, which in the first New Order album was very reminiscent of Ian Curtis's, will divide fans of the old band.During his career he will use various surnames: Sumner is his birth surname, while Dicken is the surname of his godfather. He married on October 28, 1978 to Sue Barlow but, just like his colleague Peter Hook, he will divorce shortly thereafter. Passionate about rock music and electronic music, he boasts some collaborations: among these the Electronic project with Johnny Marr of the Smiths, an appearance with the Chemical Brothers, with whom he sings in the single Out of Control (1999) and with Primal Scream (2000) . In 2009 he formed Bad Lieutenant together with Jake Evans and Phil Cunningham, the latter already in the New Order.

The character Sumner was portrayed in two films. John Simm played him in the 2002 film 24 Hour Party People, which told the story of Factory Records. In the film on the biography of Ian Curtis, Control, the role of him was entrusted to the actor James Anthony Pearson.

Wikimedia Commons contains images or other files about Bernard Sumner