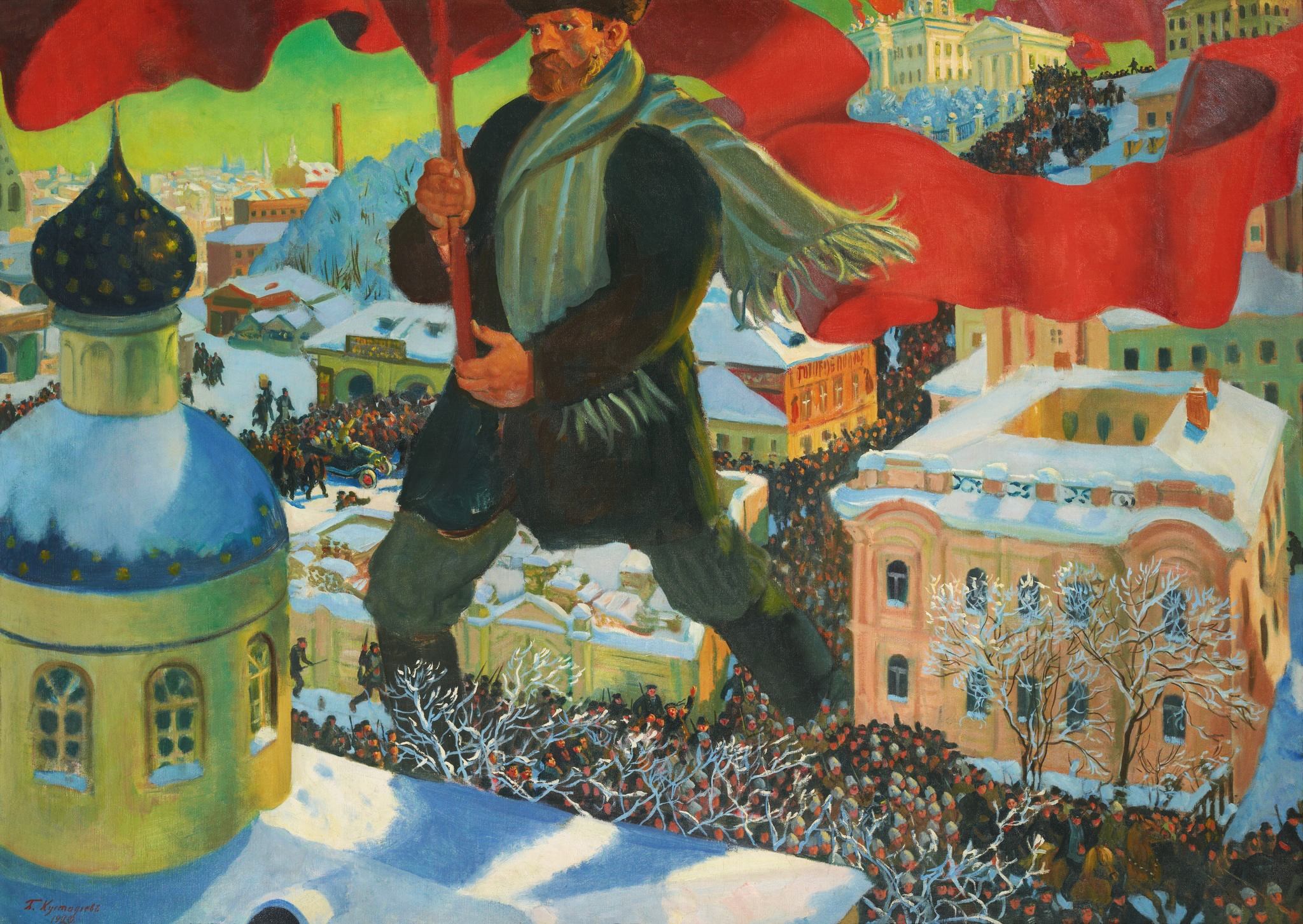 Bolshevism (in Russian: большевизм ?, transliterated: bol'ševizm) is a current of Marxist political thought, developed at the beginning of the twentieth century within the Russian Social Democratic Workers' Party (POSDR) and materialized in the formation of the Bolshevik Party, then Communist Party of the Soviet Union (CPSU). The origin of the term is linked to the balances recorded in some votes of the II Congress of the POSDR, held in hiding between Brussels and London in 1903: those who supported the strategic and organizational theses supported by Lenin were called Bolsheviks (большевики, bol'ševiki) , ie majority, while those who opposed them were called Mensheviks, ie minorities.

At the beginning of the twentieth century, Lenin and his collaborators at the Iskra newspaper theorized the need for a "democratically centralized, stable and cohesive party, based on a revolutionary Marxist program", capable of "providing the struggling working class with a kind of leadership that would have ensured proletarian hegemony in the battle for democracy until the triumph of socialism ”. The phase of realization of this party idea led to a clash, within the II Congress of the POSDR (the first effective after the founding one in 1898, which took place in precarious conditions), between the so-called "iskristi" and other currents of Russian social democracy. . The former prevailed over the economists, who preferred a weak organizational structure, and over the Bund, which pressed for a federal organization of various socialist groups, including the Jewish one. The Congress, however, also registered a bitter internal conflict within the "iskristi" themselves. The latter were divided into two fractions: one, led by Lenin, was called Bolshevik and the other, led by Martov, was called Menshevik. The clash concentrated above all on Article 1 of the Party Statute: while the formulation proposed by Lenin required the members to participate actively in one of the organizations of the POSDR, the one advanced by Martov believed that the fact of collaborating with the party was sufficient for acceptance into the party. it, even without directly participating. The two different versions implied two different party ideas: a vanguard force, lean and composed of professional revolutionaries for Lenin, a large and mass organization for Martov. After much heated debate, the assembly approved Article 1 in Martov's version, while the rest of the text reflected Lenin's idea. the Bolsheviks and the Menshevik Organizing Commission, while after the start of the Russian Revolution of 1905 the Bolsheviks held the III Congress of the POSDR (which approved Article 1 of the Statute in Lenin's version) and the Mensheviks held a Party Conference, with each of the two assemblies which elected separate executive bodies. The revolutionary dynamics led to attempts at rapprochement between the two currents, and in the spring of 1906 a unitary Congress was held. The reactionary period that opened in 1907, however, weakened the entire social democratic movement and sharpened the tensions within the party and the currents themselves.

Deep dissension broke out among the Bolsheviks among the main leaders of the troika which between 1905 and 1907 had supervised the activity of the fraction: Lenin, Krasin and Bogdanov. In particular, the latter, also supported by Krasin and by what, by the newspaper Vperëd, was called the group of "vperiodists", supported so-called "ultra-left" positions, focused on giving priority to the illegal activity of the party and to action military. Lenin, who found the support of Kamenev, Zinov'ev, Rykov, Tomsky and the majority of the fraction, instead considered fundamental,