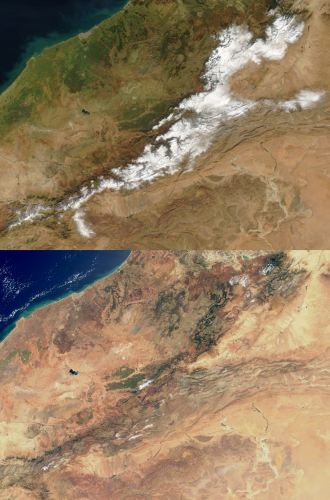 By Berber calendar we mean the agrarian calendar traditionally used in the Maghreb regions. This calendar is also known in Arabic with the epithet of ﻓﻼﺣﻲ, fellāḥī ("farmer") or ﻋﺠﻤﻲ, cajamī ("not Arabic"). It is used to regulate seasonal agricultural work, instead of the Islamic calendar which, being of a lunar type with no connection with the cycles of the seasons of the year, is useful for calculating religious holidays but is badly suited for use in agriculture.

Very little is known about the division of time among the Berbers of antiquity. Some elements of a pre-Islamic and almost certainly pre-Roman calendar emerge from some medieval writings studied by N. van den Boogert. Some coincidences with the traditional calendar of the Tuareg suggest that in ancient times there was, with a certain diffusion, a "Berber" time calculation, organized on indigenous bases. Not having sufficient elements to fully reconstruct this original calendar, we can only detect some interesting characteristics, for example the fact that several names of months appear in pairs (in the Tuareg world even in groups of three), which suggests a division of the time different from today's in months of about 30 days Some further information, however difficult to specify and to relate to the situation in the rest of North Africa, can be obtained from what is known about the calculation of time at the Guanches of the Islands Canary Islands. According to a seventeenth-century manuscript by Tomás Marín de Cubas, they The same manuscript notes (in an unclear way) that graphic-pictorial recordings (tara) were made of these calendar events on different supports, and on this basis some modern scholars wanted to find descriptions of astronomical events linked to the annual cycles in a series of geometric paintings found in some caves on the island of Gran Canaria, but the results of these studies are for now highly hypothetical. It also has the name of a single month in the native language, handed down as Beñesmet or Begnesmet. It seems it was the second month of the year, corresponding to the month of August. This name, if it were composed of something like * wen "that of" + (e) smet (or (e) zmet?), Could find, in the list of medieval Berber months, a correspondence with the ninth and tenth, month, awzimet (properly aw "son of" + zimet "gazelle"). But the data are too scarce to be able to deepen this hypothesis.

The Berber agricultural calendar still in use today almost certainly derives from the Julian calendar, introduced in Roman Africa at the time of the domination of Rome, as shown by various circumstances: the names of the months of this calendar (both in Berber and Maghrebi Arabic) evidently derive from the corresponding Latin names; the beginning of the year (the first day of yennayer) corresponds to January 14 (although some sources consider 12) of the Gregorian calendar, which coincides with the difference of 13 days that has occurred over the centuries between astronomical dates and the calendar Julian; the length of the year and of the individual months is the same as in the Julian calendar: three years of 365 days followed by a leap year of 366, without exception (and months of 30 and 31 days, with the second of 28). The only slight divergence is that the extra day in leap years is not usually added to the end of February but to the end of the year. Nevertheless, J. Servier expressed reservations that this calendar represents an extension. seamless continuity of the Julian calendar of the Latin era, and hypothesized, without proof, that it came from a Coptic calendar brought to North Africa by the Arabs. However, this is a baseless hypothesis. Apart from the fact that the structure of the Coptic calendar is ex