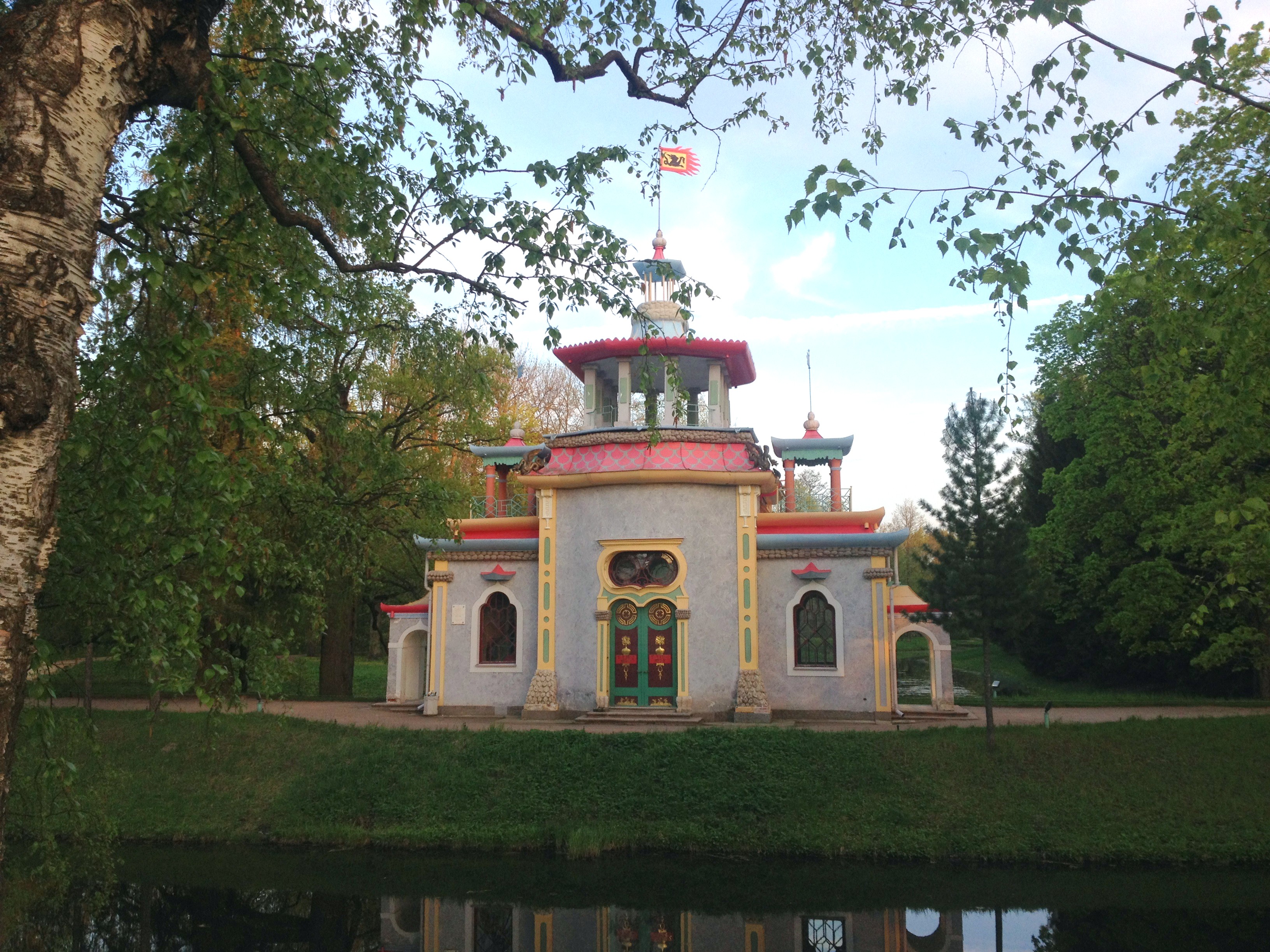 The Chinese pavilion (in Russian: Китайская беседка ?, transliterated: Kitajskaja besedka, literally "Chinese gazebo"), better known as a crackling kiosk (in Russian: Скрипучая беседка ?, transliterated: Skedripučaja an architectural , in Russia. The building is located at the entrance to the Chinese village, an orientalizing architectural complex located at the Catherine Palace in the city of Pushkin. The name of the building refers to the creaking sound produced by the metal weather vane placed on its top when it is hit by the wind.

Catherine II's taste for Chinese culture is reflected in the Chinoiserie of Alexander Park, including the crackling kiosk. The pagoda was built from 1778 to 1786, coinciding with the beginning of the construction of the Chinese village (which, however, will be completed only after the death of Catherine II). The original project is believed to be by Georg Friedrich Veldten (known in Russia as Jurij Fel'ten) and that the architects Ilya Neelov and Antonio Rinaldi participated in the work. structure was damaged during the Second World War, but was restored between 1954 and 1956. The restorers, including Anatolij Treskin, worked mainly on wooden sculptures, in granite and marble and recreated most of the lost parts starting from of new sketches. The ceiling of the main hall and that of the first floor have been renovated, as well as the sculptures of dragons in the corners of the roof, originally made by the sculptor of French origin Pavel Brioullo. A series of hieroglyphs on the front door were replaced with text in Chinese characters that read "welcome". However, the Chinese pavilion was damaged again, so a new restoration was required. The works for the new restoration should have started in 1992, but were postponed to 1997 due to the financial difficulties of the time in the Russian state budget. The roof of the Chinese summer house was replaced by a new one made of zinc.

Located on a narrow isthmus between two ponds, the pavilion is elongated longitudinally. The building has tuff plinths, carved windows and spans and picturesque capitals. The Chinese-style roof (with raised corners) is decorated with gilded wooden dragons originally sculpted by Pavel Brioullo. In 1782 the work of plaster imitation marble was directed by master Bernaskoni. The internal and external decoration were carried out in 1788. Above the lateral spaces of the pavilion there are terraces that have a structure whose roof is supported by quadrangular columns and has a weather vane. The exterior walls of the structure are painted to mimic the shape and color of the marble. Finally, a staircase of twelve stone steps leads to one of the lakes.

Wikimedia Commons contains images or other files about Crackling Kiosk