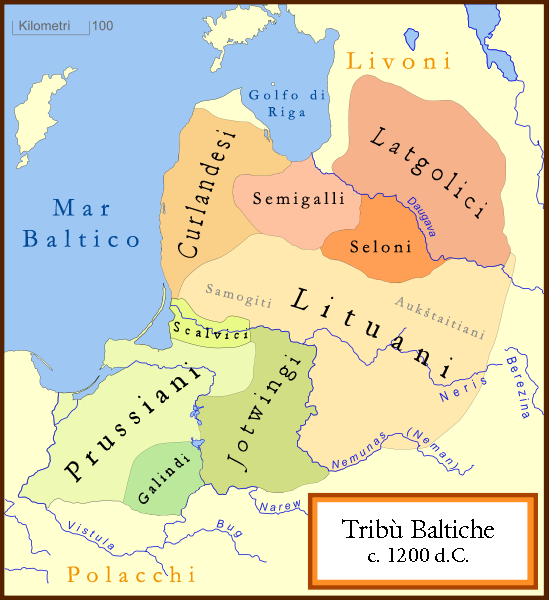 The Livonian crusade was a conflict fought in the Late Middle Ages between a coalition of crusaders and European powers against the indigenous peoples settled in today's Baltic countries, particularly in Livonia. The causes that triggered it were various, not least those of a commercial and political nature, but the official pretext was to Christianize today's Latvia and Estonia. The lands on the eastern shore of the Baltic Sea remained the last corner of Europe still attached to traditional pagan rites, but during the conflict, together with the religious conversion, both the conquest and the colonization of medieval Livonia by the Germans and the Danes. In 1198, Pope Innocent III proclaimed a crusade against Livonia, whose inhabitants had violently repelled the missionaries who had tried to spread the teachings of Christ in that area. The intervention of the enterprising bishop Albert of Buxthoeven, who oversaw the foundation of the important city of Riga, among other things, led to the establishment of a knightly order known as the Sword-bearer Knights, whose contribution was essential in the early campaigns of conquest. Also thanks to the assistance of Denmark and the Crusaders who came from various areas of Europe, the superiority of the Westerners allowed an expansion like wildfire in all directions, with the subjugated regions which then ended up under administrative and ecclesiastical authority. of the clergy. In 1215, on the proclamation of Innocent III, an entity called Terra Mariana was established in the acquired territories, which was formally subject to the Holy See and the Holy Roman Empire in the form of a vassal state. Internal disputes soon arose in the Christian coalition which ended only with the intervention of the papal legate William of Modena, who promoted the division into six feudal principalities of what was acquired by the Germans, the Danes, the clergy and the knightly order. The crusade continued more or less smoothly depending on the adversaries (Livoni and Letgalli between 1198 and 1209, Estonians between 1208 and 1227, Osiliani between 1206 and 1261, Curi between 1242 and 1267 and Semigalli between 1219 and 1290), but it proved to be particularly complicated the conquest of the island of Saaremaa and the management of the uprisings which broke out several times at the incitement of the local tribes, who felt oppressed by the authority of the new lords. The conclusion of the Livonian crusade is identified in 1290, the year in which the last rebellion that exploded in modern-day Latvia was quelled and the moment from which the crusaders concentrated on the acquisition of the Baltic regions still not subjected and located in Lithuania. Traditional historiography, whose vision appears to be outdated today, did not register the conflict in question in the category of crusades, considering it different from the struggles fought in the Holy Land for various reasons. The recent analyzes carried out by scholars of various nationalities in the second half of the twentieth and twenty-first centuries have allowed us to throw new life and new ideas for reflections on the Livonian crusade, also thanks to a painstaking study of the available sources and the adoption of approaches more aware historiographers.

With the decline of the Viking epic, as Scandinavian rulers found themselves cut off from the long-range overseas conquests of the past, new Slavic state realities began to take on strength in Eastern Europe. Mainly in the thirteenth century, the Germans also began to trade with the Baltic areas, especially along the Variago-Greek route; along with them came Christianity, which seduced some of the natives and convinced them to undergo baptism. hates