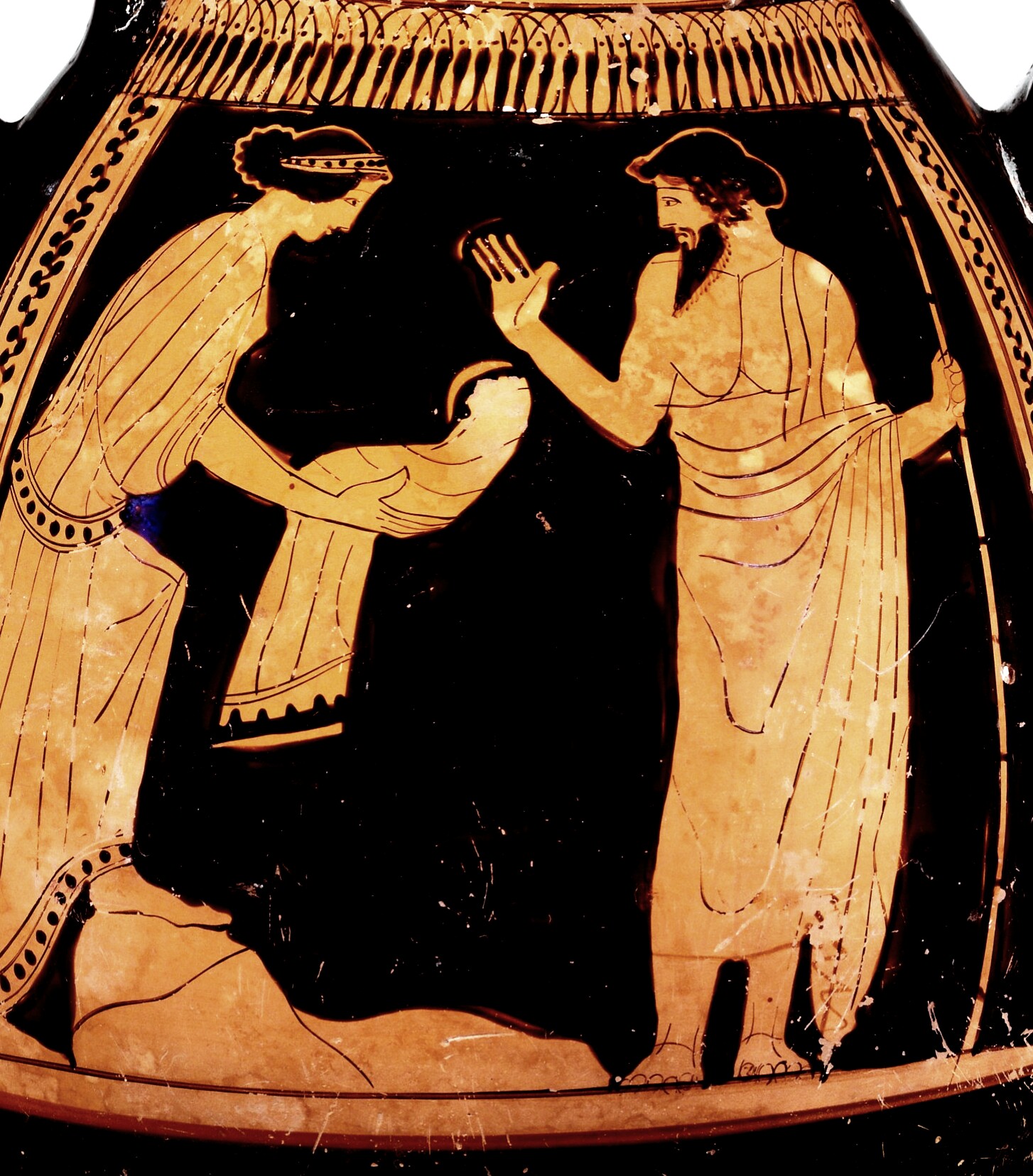 Cronos or Kronos (in ancient Greek: Κρόνος, Krónos) is a pre-Olympic divinity of Greek mythology and religion, in the most widespread myths son of Uranus (Heaven) and of Gea or Gaia (Earth), Titan of Fertility, of Time and of Agriculture, second lord of the world and father of Zeus and the first Olympians. He is not to be confused with Chronos, divinity of time in Orphism. Cronus is identified as Saturn in Roman mythology.

In Hesiod's Theogony, vv. 133-138, it is narrated that Gea (Γαῖα, "Earth"), joining Uranus (Οὐρανός ἀστερόεις, "Starry sky"), generates the Titans: Ocean (Ὠκεανός), Coio (Κοῖος, also Ceo), Creio (Κριός, also Crio), Hyperion (Ύπέριον), Iapetus (Ιαπετός), Theia (Θεία, also Teia or Tia), Rea (Ῥέα), Themis (Θέμις, also Temi), Mnemosyne (Μνημοσύνη, also ηmosine), Phoibe Phoebe), Tethys (Τηθύς, also Teti) and Kronos (Κρόνος, also Cronus). After the Titans (vv. 139-153), the union between Gea and Uranus generates the three Cyclops (Κύκλωπες: Brontes, Steropes and Arges); and the Centimani (Ἑκατόγχειρες, Ecatonchiri): Cotto, Briareus and Gyges of terrible strength. Uranus (vv. 154-182), however, prevents the children he generated with Gaea, the twelve Titans, the three Cyclops and the three Centimani, from coming to light. According to some authors, the reason for this refusal lies in their "monstrosity". Here is the mother of these, Gaea first builds a toothed sickle and then invites her children to get rid of the father who forces them into her womb. Only the last of the Titans, Cronus, responds to the call of the mother: as soon as Uranus lies down again on Gaia, Cronus, hidden, casts him using a harpe. From this moment begins the dominion of Cronus, who, joining Rhea, generates: Istie (Ἱστίη, Ionic; also Estia from the Attic Ἑστία), Demeter (Δήμητρα), Era (Ἥρα, also Hera), Hades (Ἅιδης) and Ennosigeo (Ἐννοσίγαιον, Shaker of the earth, to be understood as Poseidon or Poseidon Ποσειδῶν).

Sometimes, the so-called "myth of Cronus" (or Saturn, for the Latins) or the so-called "Syndrome of Cronus" is indicated, the psychic pathology of a father who desires, or even carries out, the murder of his own son, so likewise the desire or act of a mother to kill her children is indicated as "Medea's syndrome". Like his father Uranus, in fact, Cronus also wanted to kill his children. An oracle had predicted that one of his babies, once he grew up, would sooner or later overthrow him. To prevent this, being immortals themselves and not being able to simply kill them, as soon as they were born he swallowed them. The painting by Francisco Goya is famous of this bloody act. One day, however, his wife Rhea, pregnant with Zeus (Ζεύς), counseled with the same parents, decides to give birth in secret in Lycto (Crete), giving Kronos a stone that the latter will devour thinking it was his last child. For mythology, therefore, Cronus not only became the symbol of the devourer of children but, just like chronological time, precisely the inexorable passing of time as a devourer of all events. Zeus (vv. 492-500) therefore, will grow in strength and intelligence and finally defeat his father Cronus, making him regurgitate the other children he had devoured, and the first object thrown up by Cronus is precisely that stone that he had swallowed, mistaking it for Zeus. Then Zeus (vv. 501-506) unties the three Cyclops so forced by Cronus himself, who will reciprocate by delivering the Thunderbolt (lightning). Verses 617-720 of Theogony deal with the Titanomachy, that is the struggle between the titans residing on Mount Othrys and the gods of Olympus (sons of Cronus and Rhea): for ten years the struggle between the two sides has continued in