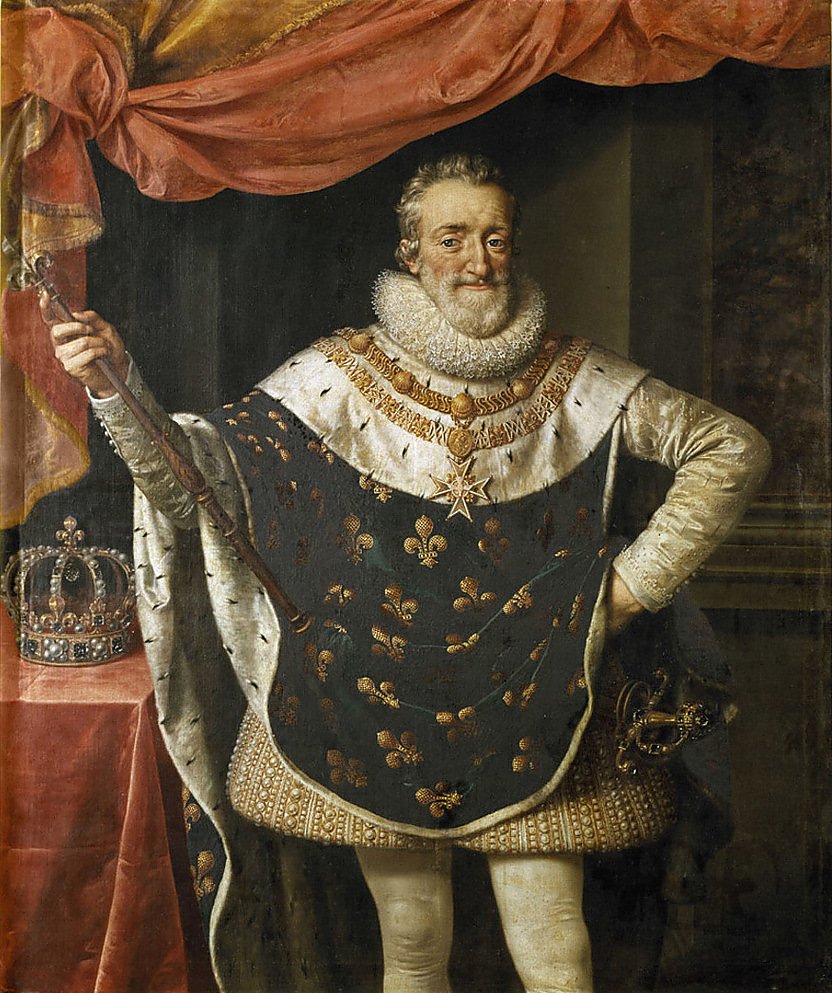 Henry IV of Bourbon, known as Henry the Great (le Grand) (Pau, 13 December 1553 - Paris, 14 May 1610), was king of France, first of the House of Bourbon. Son of Antonio di Borbone and Queen Giovanna III of Navarre, in 1572 he inherited the crown of Navarre from his mother, becoming Henry III of Navarre. In 1589 he took over from Henry III of France, being presumptive heir for the death of the Duke of Anjou, opening the way to Paris only in 1594, after having abjured the Calvinist religion, becoming the first monarch of the Bourbon branch of the dynasty of Capetian to rise to the throne. He was called the Great, but he also had the nickname of Vert-galant, a literary expression that designates the loving enterprise that characterized Henry, despite the advanced age in which he conquered the throne.

Henry IV was born on December 13, 1553 in Pau, capital of the Viscount de Béarn, at the time located in Aquitaine. He was the son of Anthony of Bourbon, Duke of Vendôme, and of Joan III, Queen of Navarre. His birth took place in the castle of the French town, owned by his maternal grandfather, Henry II of Navarre, who rejoiced at the event, since he had long wanted his only daughter to produce a male heir. At the castle of Pau you can still see the tortoise shell which was used as the cradle of Henry IV: this curious object was part of the "Chamber of Henry IV", located in the apartments of Queen Giovanna. He was awarded the title of Prince of Viana. On 6 March 1554 he was baptized in the castle chapel by the bishop of Rodez, Cardinal d'Armagnac. He had as godparents the king of France Henry II and his maternal grandfather Henry and as godmothers the queen of France Caterina de 'Medici and his great-aunt Isabella of Navarre, at the time widow of Renato I of Rohan. Not being able to attend the ceremony in person, the king of France sent the cardinal bishop of Nevers Charles of Bourbon-Vendôme as his representative.

He grew up in the castle of Coarraze, knowing firsthand the life and condition of the French peasants. This earned him the nickname "Barbaste miller". Her mother Giovanna, who converted to Calvinism, decided to educate her son according to the precepts of this religion. In 1572, on the death of his mother, he became ruler of the Kingdom of Navarre and the county of Foix. As a consequence of this, Catherine de 'Medici induced him to marry Margaret of Valois, sister of Charles IX of France. He was forced to abjure following the events of San Bartolomeo, which occurred on the occasion of the wedding, five days after the ceremony, in a position of clear political weakness. Protestant, thus retracting the forced abjuration. With the peace of Beaulieu, in May 1576, which granted a momentary freedom of worship and eight strongholds to Protestants, Henry regained the confirmation of his office as governor of Guienna, inherited from his father, making it a Protestant hotbed within the kingdom. In this phase he established himself at the head of the reformed party, becoming the main antagonist of the Guise family, returning to the Huguenot faith as early as June 1576. On September 17, 1577, the Edict of Poitiers confers further guarantees on the Huguenots, inaugurating a period of relative peace, which will last until 1583. Reformed worship was allowed in the city suburbs and bipartite chambers for reformed and Catholics were established in some parliaments of the kingdom, as well as granting guarantees in the matrimonial and civil fields. The achievement of this balance was due to Enrico's diplomacy.

"War of the three Enrichos"

The death of the last Valois heir, Francesco d'Anjou, however, accelerated the resumption of the conflict. Starting from 1585, it begins