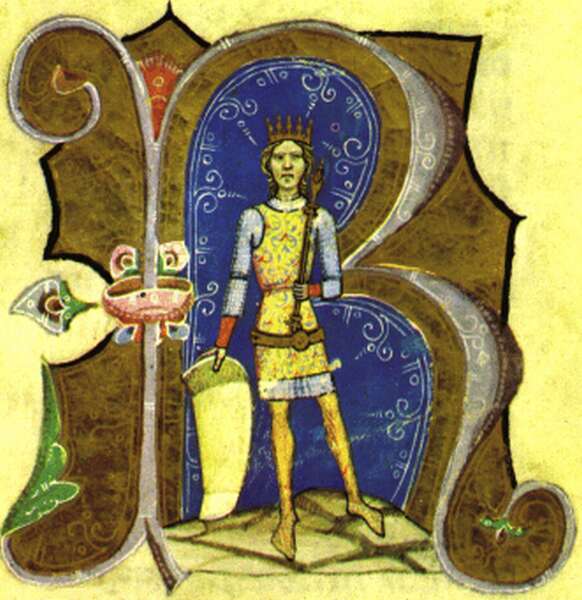 Géza II (in Hungarian II. Géza; in Croatian Gejza II; in Slovak Gejza II; Tolna, 1130 - Albareale, 31 May 1162) was king of Hungary from 1141 to 1162. Firstborn of Blind Béla II and his wife, Helen of Rascia, when his father died, Géza was still a child and began to rule under the tutelage of his mother and her brother, Beloš. A pretender to the throne, Boris Colomanno, who had already claimed Hungary during the reign of Béla the Blind, temporarily settled in Presburg (today's Bratislava, Slovakia) with the assistance of German mercenaries in early 1146. In retaliation, Géza, who came of age in the same year, invaded Austria and defeated the troops of Henry II of Babenberg, a local margrave, in the battle of Fischa. Although German-Hungarian relations remained strained, no major confrontations occurred when the Crusader Germans marched through Hungary in June 1147. Two months later, Louis VII of France and his followers arrived along with Boris Colomanno, who attempted to take advantage of the crusade. to return to Hungarian territory. Louis VII refused to extradite Boris and hand him over to Géza, while preventing the suitor from making contact with his supporters in Hungary and taking him to Constantinople. Géza joined the coalition formed by Louis VII and Roger II of Sicily against Conrad III of Germany and the Byzantine emperor Manuel I Comneno. The ancestors of the Transylvanian Saxons arrived on Hungarian soil during the reign of Géza. Western European horsemen and Muslim warriors from the Pontic steppes also settled in Hungary around this time. Géza allowed his Muslim soldiers to take concubines, an unprecedented measure. The ruler intervened at least six times in the fighting for Kiev on behalf of Izjaslav II by sending reinforcements or personally leading his troops into Rus' between 1148 and 1155. He also waged wars against the Byzantine Empire on behalf of his allies, including his cousins, the rulers of the Grand Principality of Serbia, but he could not prevent the Romans from prevailing in the struggles that afflicted the neighboring state. At the same time, conflicts emerged between Géza and his brothers, Stephen and Ladislaus, who left Hungary and settled at the court of Emperor Manuel in Constantinople. Géza supported Frederick Barbarossa against the Lombard League by making support soldiers available between 1158 and 1160. After the cardinals who supported Frederick Barbarossa elected Victor IV as antipope, Géza recognized his legitimacy in 1160, but changed his party within a year and concluding a concordat with Victor IV's opponent, Pope Alexander III. Before his death, Géza established a separate duchy in the form of a prerogative for one of his sons, Béla.

Géza was the eldest son of Béla II the Blind, cousin of King Stephen II of Hungary, and Helen of Rascia, and was born in 1130. Géza's father had been blinded along with his rebellious father, Álmos, in 1110 by order of the father of Stephen II, Coloman of Hungary, who wanted to secure Stephen's succession. When Géza was born, his parents were in a possession that King Stephen had granted to Béla located in Tolna. Géza's father succeeded King Stephen in the spring of 1131; according to the Chronica Picta, in the same year, Queen Elena took Géza and her younger brother, Ladislao, to an assembly held in Arad, where she ordered the massacre of sixty-eight nobles "who had advised the king to be blinded".

King Béla died on February 13, 1141 and Géza succeeded him without any other pretender; 11-year-old Géza was crowned on February 16. During the parenthesis of the regency, his madr