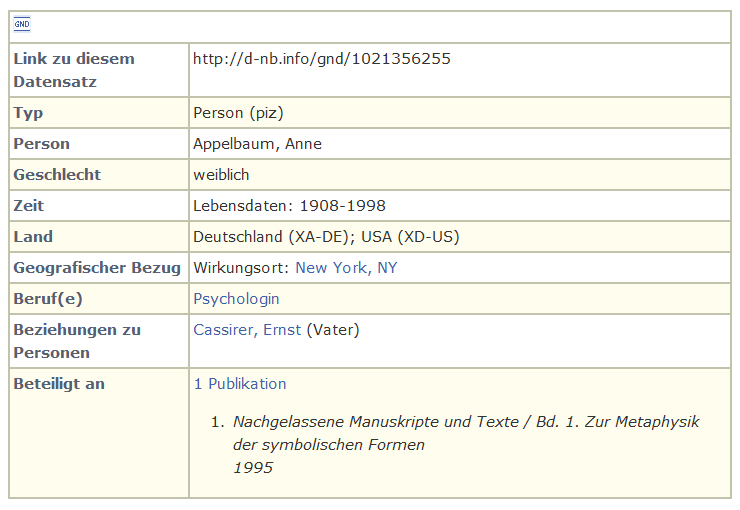 The Gemeinsame Normdatei (GND) is an authority control system managed by the German National Library in collaboration with other libraries, mainly of German-speaking areas, which take care of its updates via OAI. It is used to catalog data on persons, legal entities, entities, works, topics, congresses and events, geographical elements. It is mainly used by libraries, but increasingly also by archives, museums and for network applications. The GND data facilitate the cataloging procedure, allow unique research approaches and the possibility of connecting to different sources of information. They are also part of the Virtual International Authority File (VIAF) system, in which the GND is virtually connected with other authority controls at an international level. From 19 April 2012 GND replaced the checklists hitherto used for persons, institutions, subjects and titles by the German Music Archive (Deutsches Musikarchiv, DMA-EST-Datei). Since July 2014, RDA data has been included, used among others by the Library of Congress. GND uses the specifications of MARC 21 and makes the data available free of charge in RDF format under the CC0 license.

GND is part of a global project of the Deutsche Nationalbibliothek, which began in 2009 and ended on 30 June 2012, aimed at all German-language libraries and online databases of electronic periodicals. The aim of the project was to unify the various types of data previously managed separately, standardizing their format and adapting the existing rules. The construction of the format was based on several pre-existing rules: the rules for alphabetical cataloging (Regeln für die alphabetische Katalogisierung, RAK-WB and RAK-Musik) for the form, and the rules for semantic cataloging (Regeln für den Schlagwortkatalog, RSWK ) for the content. The pre-existing rules for the construction of the accepted terms were not homogeneous and led to redundant results, in particular with regard to institutions, congresses and geographical areas. Therefore, transitional provisions were conceived for the GND in the case of deviations of the rules for the formal and semantic part, in order to allow a general use for the composition of the data. These transitional provisions were aligned as far as possible with the rules of the RDA. The data format of the control archive, as well as the internal and exchange formats, differed considerably at times. By reuniting all existing formats in the GND exchange format, based on the MARC 21 specification, all disparities could be remedied.

In December 2012, the cooperation project called Institutionenübergreifende Integration von Normdaten (IN2N, "Extension of data integration to institutions") was launched between the Deutschen Nationalbibliothek (DNB) and the German Film Institute (Deutschen Filminstitut, DIF). The aim of this project, born from the German Research Society (Deutsche Forschungsgemeinschaft, DFG), was the possibility of using the GND archive outside the library environment, involving the institutions in updating the data. It also made it possible to align the data with personal voices on Wikipedia. At the end of 2014, the alignment of the DIF data in the GND was completed. In the previous months, the data from the Latin American Institute of Berlin and the scientific research site for Eastern Europe of the University of Bremen had been merged into the GND. The content of the Gemeinsame Normdatei in June 2015 exceeded eleven million pieces of data; periodic updates on changes in content and formats are reported on the website of the German National Library.