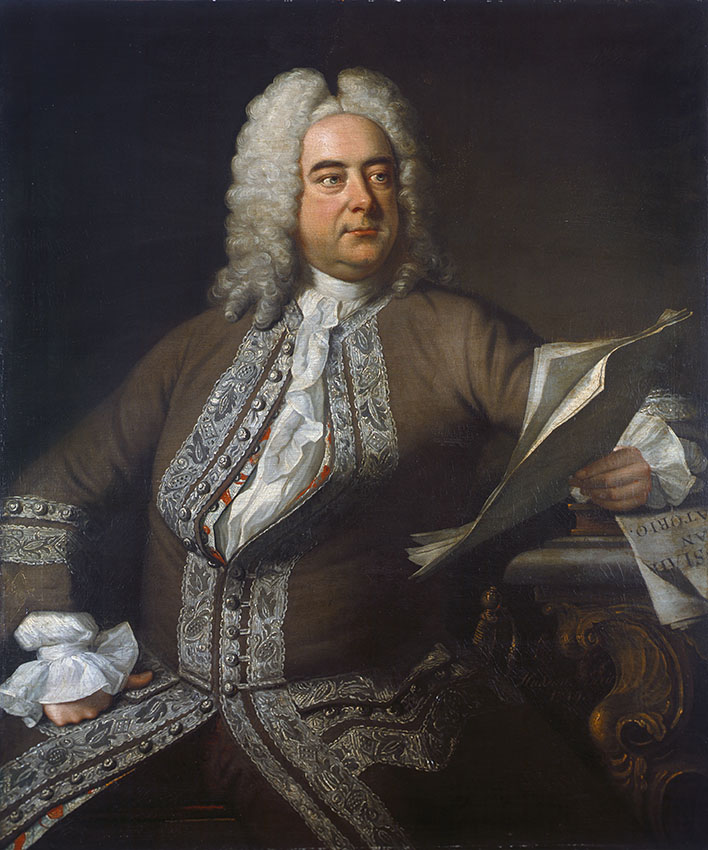 Georg Friedrich Händel, (German spelling; pronunciation: / hɛndəl /), or George Frideric (or Frederick) Handel (English spelling; pronunciation: / hændəl /) (Halle, 23 February 1685 - London, 14 April 1759), was a German composer naturalized English, of the Baroque period, who spent most of his career in London, becoming well known for his operas, oratorios, anthems, big concertos and organ concerts. Handel received critical training in Halle, Hamburg and Italy before settling in London in 1712; he became a naturalized British citizen in 1727. The prevailing tendency in Italy is to write his name as it was originally, in the German style, although the composer (as was usual at that time) was called Hendel during his stay in Italy, and has always signed himself "at the English "from when he landed in England until the end of his life. He was strongly influenced both by the great composers of the Italian Baroque and by the Middle German polyphonic choral tradition. Within fifteen years, Handel had started three commercial opera companies to cater to the demand for Italian operas from the English nobility. Musicologist Winton Dean writes that his works show that "Handel was not only a great composer, he was a first-rate dramatic genius." As Alexander's Feast (1736) had gained a warm reception, Handel made a transition to English choral works. After his success with the Messiah (1742) he never performed an Italian opera again. Almost blind and having lived in England for nearly fifty years, he died in 1759, a respected and wealthy man. His funeral was held with full honors of state and he was buried in Westminster Abbey in London. Born the same year as Johann Sebastian Bach and Domenico Scarlatti, Händel is regarded as one of the greatest composers of the Baroque era, with works such as Music on the Water, Music for Royal Fireworks and the Messiah remaining consistently popular. One of his four coronation anthems, Zadok the Priest (1727), composed for the coronation of George II of Great Britain, was performed at each subsequent British coronation, traditionally during the anointing of the ruler. Handel composed more than forty serious works in over thirty years and interest in his works has grown since the late 1960s, with the rebirth of Baroque music and the concept of historically informed musical performance.

Handel was born in 1685 in Halle, Duchy of Magdeburg, to Georg Händel and Dorothea Taust. His father, who was 63 when Georg Friedrich was born, was a distinguished barber-surgeon who served at the court of Saxe-Weissenfels and at the Brandenburg Brand. According to Handel's first biographer, John Mainwaring, he "had discovered such a strong inclination for music, that his father, who had always seen him destined for the study of civil law, had reason to be alarmed. He strictly forbade him to meddle with any musical instrument, but Handel found a way to get a small clavichord transported in great secrecy to a room at the top of the house. In this room he would constantly go into hiding when the family was asleep. " Already at a young age, Handel had become an expert harpsichord and pipe organ interpreter. Until the seventeenth century, most of the musicians were all children of art, a profession that was handed down from father to son. Handel, on the other hand, was the only musician in a Silesian family of Lutheran religion: his grandfather Valentin was born in Breslau in 1583, and moved to Halle in 1609, where he practiced the profession of boiler seller. The family name is spelled correctly in various ways, five of which are attested in the baptismal records of the Liebfrauenkirche (Church of Notre-Dame) in Halle, and are: Händel, He