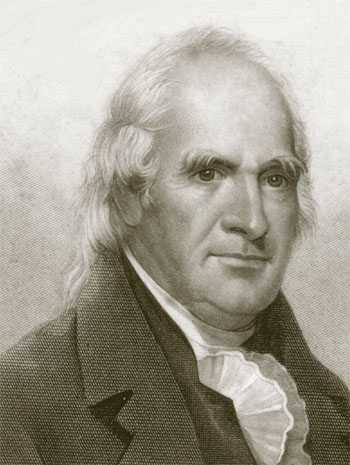 George Clinton (New Windsor, July 26, 1739 - Washington, April 20, 1812) was an American military and politician, considered one of the founding fathers of the United States. A prominent member of the Democratic-Republican Party, Clinton was the fourth vice president of the United States of America from 1805 until his death in 1812. He was also the first governor of the State of New York, from 1777 to 1795. the office from 1801 to 1804. Along with John C. Calhoun, he is one of two vice presidents to hold a mandate with two different presidents. Clinton served in the French-Indian War, reaching the rank of lieutenant in the colonial militia. He began legal practice after the war and served as the district attorney for the city of New York. He then became the first governor of New York State in 1777, remaining in office until 1795. Clinton supported the cause of independence during the American Revolutionary War and served in the Continental Army despite his position as governor. During and after the war, Clinton was a major opponent of Vermont's entry into the Union due to disputes over territorial claims. Clinton opposed the ratification of the Constitution of the United States of America, becoming a prominent anti-federalist by supporting the addition of the so-called Bill of Rights of the United States (i.e. the first ten amendments to the Constitution). In the early 1790s, he emerged as the leader of the fledgling Democratic-Republican Party by running for election in the 1792 presidential election. Clinton with 50 electoral votes placed third, behind unanimously re-elected President George Washington and outgoing Vice President John Adams , who thus obtained re-election thanks to 77 electors. In 1795, Clinton did not seek re-election as Governor of New York, but was re-elected in 1801, remaining in office until 1804. His was the longest term as governor in US history until 2015, when Terry Branstad surpassed his record. Clinton was again chosen as the Democratic-Republican Party's vice presidential candidate in the 1804 election, when President Thomas Jefferson broke off relations with outgoing Vice President Aaron Burr. Later, Clinton sought his party's presidential nomination in the 1808 election, but the caucus named James Madison. Despite his opposition to Madison, Clinton was nevertheless re-elected vice president and remained so until his death in 1812, thus leaving the office of vice president vacant for the first time in US history. Clinton's nephew, DeWitt Clinton, continued his family's political action in New York after his uncle's death, first as mayor of the city and then as governor of the state.

Clinton was born in 1739 in Little Britain, in the province of New York. His parents were Colonel Charles Clinton and Elizabeth Denniston Clinton, Presbyterian immigrants who had left County Longford, Ireland in 1729 to escape the religious persecution that significantly discriminated against Protestants in England under British rule. not Anglicans and Catholics. His political interests were inspired by his father, who was a farmer, land surveyor and land speculator, and served as a member of the New York Colonial Assembly. George Clinton was the brother of General James Clinton and uncle of the future governor of New York, DeWitt Clinton. George was taught by a Scottish priest.

During the French-Indian War he first served on the Defiance ship active in the Caribbean, before joining the provincial militia, where he attained the rank of lieutenant, while his father held the rank of colonel. In 1758, under the orders of the gene