Day of Cyrus the Great 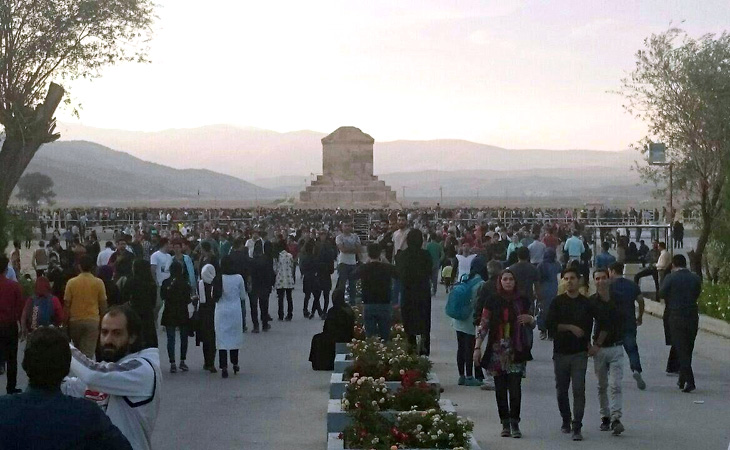 Cyrus the Great Day (Persian روز کوروش بزرگ, "ruz-e kuroš-e bozorg") is an unofficial Iranian holiday that takes place on the seventh day of Aban, the eighth month of the solar calendar Hijri (October 29 in the Gregorian calendar), to commemorate Cyrus the Great, the founder of the ancient Persian Achaemenid empire. The festival consists mainly of gatherings at Cyrus' tomb in Pasargade, in the province of Fars. In October 2021, the Iranian police banned people from visiting the mausoleum.

Cyrus the Great's Day is an invented tradition introduced in the early 2000s on the Internet and social networks. Based on some historical records, October 29 was the day Cyrus entered Babylon after the Neo-Babylonian Empire fell to the Achaemenid Persians in the Battle of Opis. The holiday is observed by Iranian nationalists and monarchists to pay homage to the pre-Islamic history of Iran.The celebrations are not official and the holiday is not indicated in any official calendar, neither in Iranian nor in UNESCO calendars. There were requests to the Iranian government to officially recognize the day In 2017 Bahram Parsaei, the representative of the Shiraz electoral district in the Iranian parliament, openly expressed a request that the state recognize and observe the holiday.

In 2016, the holiday fell on October 28 (due to the overlap of leap years in the Iranian and Gregorian calendars) and Friday (official day of the weekend in Iran for its Islamic significance). As a result, Cyrus' tomb in Pasargadae attracted thousands of people from all over the country who celebrated the day and chanted nationalist slogans. Nomads, tribes and ethnic minorities, including Kurds and Iranian Arabs, were present at the celebrations in their traditional ethnic dress. Attendance was unprecedented according to onlookers, and the roads leading to the grave reportedly saw a major traffic jam. An unofficial 2017 estimate puts the attendance figure at between 15,000 and 20,000 people.

The rallies eventually turned into protests against the ruling Islamic theocracy. Iranian protesters reportedly chanted "No Gaza, no Palestine, we will sacrifice only for Iran!", "Iran is our homeland; Cyrus is our father" and "The clerical government is synonymous only with tyranny. , only war ", as well as" Freedom of thought cannot take place with a beard "were among the slogans of the amateur videos that went viral on social media. According to Reuters, protesters shouted anti-Arab and pro-Shah slogans . A judiciary official said the organizers of the event were arrested.

In October 2017, an official statement by the local authorities of the Ministry of Cultural Heritage, Crafts and Tourism of the province of Fars was published and disseminated on social media, stating that the Tomb of Cyrus would be closed to the public. Iranian between 27 and 30 October 2017. However, the director of the ministry officially denied that in the days leading up to the holidays, plans had been made for the closure of the tomb. Subsequently, all roads leading to Pasargad's Shahrestān were closed by Iranian authorities, motivating the closure due to "work in progress". Fences were erected around the Pasargadae mausoleum and Basij paramilitary troops were stationed in the region to hold an exercise. The spokesman for the Iranian judiciary said that the Ministry of Information and National Security had stopped plans for the "illegal rally" on the occasion of the day of Cyrus the Great.