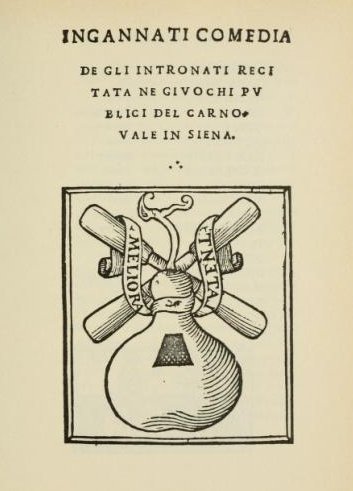 Gl'ingannati is a comedy by an anonymous author of the sixteenth century, precisely from 1531, the year before its first performance (February 12, 1532, last day of Carnival), which took place in the city of Siena inside the Palazzo Comunale. Its drafting is considered a collective work of the Accademia degli Intronati of Siena, even if some scholars attribute the authorship of the work mainly to the philologist Lodovico Castelvetro, who was an Academician of the Intronati, as confirmed by the Modena setting. distinguished, in the first phase of dramaturgical production, for the works of a certain comic lightness that favored the female sex as an objective.The first publication of the work took place in 1537 in Venice. The genre of this work is directly connected to the dramaturgical production of the Commedia dell'Arte: among the characters the characteristic "types" of the comedies of the time are recognizable. The work was very successful in Italy and abroad, so much so that it became one of the sources of inspiration for William Shakespeare for the writing of the comedy The Twelfth Night. The Sienese comedy was translated and adapted into many languages. In France it appeared as Les Abusés in 1543, while it was translated into Latin under the title Laelia (1595); in Spain, Lope de Rueda proposed an adaptation (Los engañados, 1567). In 1554 Matteo Bandello obtained the story XXXVI of the second part of the collection (Nicuola in love with Lattantio goes to serve him dressed as a page, and after many cases he gets married with her, and what happened to her brother).

To escape an arranged marriage, thirteen-year-old Lelia disguises herself as a boy with the name of Fabio and she escapes from the convent where she was locked up by her father Virginio. Entered into the service of the Modenese knight Flamminio, with whom she is in love with her, she becomes her page, used by Flamminio to deliver courteous messages to the heiress Isabella, with whom she is in love with her. Isabella in turn falls in love with the one she believes to be a page. Lelia does not reject Isabella's offers, in order to permanently remove the woman from Flamminio. To complicate the affair, Fabrizio, Lelia's twin brother, arrives in Modena. The comedy takes on Boccaccio tones when Virginio, believing he is dealing with her daughter disguised as her, locks Fabrizio in the house of Gherardo, Isabella's father, in the latter's room. Once they are left alone, the girl, believing him to be the page, gives herself to him. Flamminio, for her part, is furious with her page for letting Isabella woo him, but when Lelia reveals herself and confesses that she acted out of love, he joins her. The erotic scenes of the two couples are narrated respectively by the maid Pasquina and a young girl.

Intronati Academics of Siena, The Comedy of the Deceived, critical edition with introduction and notes by Florindo Cerreta, Florence, Leo S. Olschki, 1980, ISBN 88-222-2958-4. Accademici Intronati di Siena, Deceived comedia de gli Intronati recited in the public games of the carnovale in Siena, in Gl'ingannati with The sacrifice and The song in the death of an owl, preface by Nerida Newbigin, Sala Bolognese, Arnaldo Forni, 1984. ( facsimilar reprint of the copy of the original edition of 1537 kept in the Herzog August Bibliothek in Wolfenbüttel) Accademia degli Intronati, Gl'Ingannati, edited by Marzia Pieri, Corazzano, Titivillus, 2009, ISBN 978-88-7218-261-1.