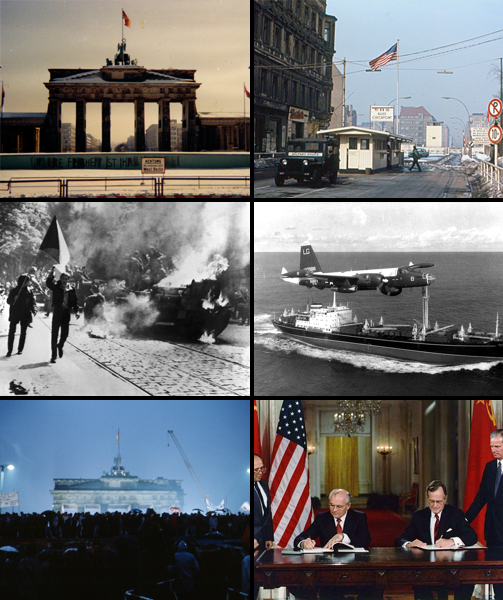 The term "cold war" indicates the political, ideological and military opposition that arose around 1947 between the two main powers that emerged victorious from the Second World War, the United States and the Soviet Union. It soon led to the division of Europe into spheres of influence and the formation of hostile international blocs, commonly referred to as the West (the United States and other NATO members), the East (the Soviet Union and the Warsaw Pact members). and, subsequently, the third block of non-aligned countries. It was essentially a question of the contrast between two great political-economic ideologies: capitalist-democracy on the one hand and real socialism-communism on the other. This contrast strongly influenced world public opinion for decades and had its concrete emblem in the division of Germany into West Germany and East Germany, the city of Berlin through the homonymous wall and in the rhetorical figure of the so-called "Iron Curtain", coined for the first time by Winston Churchill in 1946, aimed at defining the clear territorial and ideological distinction that was being created between the two dominant socio-economic blocs. The resulting tension, which lasted about half a century, never materialized in a direct military conflict, hence the term "cold" used to describe a hostility that no longer seemed resolvable through a frontal war between the two superpowers, given the danger to the survival of humanity represented by a possible use of nuclear weapons, but it developed over the years, focusing on competition in various fields (military, space, technological, ideological, psychological, sports) and contributing at least in part to the development and the evolution of society itself with the advent of the third industrial revolution. The expression had already been used in 1945 by George Orwell who, reflecting on the atomic bomb, foresaw a scenario in which the two great powers, unable to face each other directly due to the risk of mutual assured destruction, would end up dominating and oppressing all the others. In 1947 it was picked up by US presidential adviser Bernard Baruch and journalist Walter Lippmann to describe the emergence of tensions between the two Allies of World War II. the fifties and the sixties, and the second, limited to the first half of the eighties. The end of the Cold War is conventionally made to coincide with the fall of the Berlin Wall (November 9, 1989) and the subsequent dissolution of the Soviet Union (December 26, 1991).

Origins of the term

At the end of the Second World War, the English writer George Orwell used the term "cold war" in his essay You and the Atomic Bomb, published on October 19, 1945 in the British newspaper Tribune. Describing a world living in the shadow of the threat of nuclear war, Orwell, using James Burnham's predictions about a polarized world, wrote: In The Observer of March 10, 1946, Orwell wrote, "After the Moscow conference last December, Russia began a cold war against Great Britain and the British Empire." The first use of the term to describe the specific postwar geopolitical confrontation between the Soviet Union and the United States was in a speech by Bernard Baruch, an influential adviser to Democratic presidents, given on April 16, 1947. An excerpt from the speech, written by journalist Herbert Bayard Swope, states: "Let us not be fooled: we are today in the midst of a cold war". Newspaper columnist Walter Lippmann gave the term a broader reach with his book The Cold War. When in 1947 he was asked the