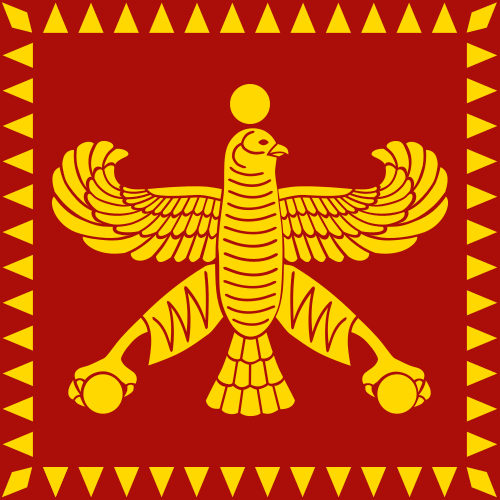 The Achaemenid empire (in Persian Haχāmanišiyā; in ancient Greek: Ἀχαιμενίδαι; in ancient Persian 𐎧𐏁𐏂, transliterated Xšāça ie "The Empire"), also called the first Persian empire to distinguish it from the second Persian empire led by the Sassanids, was a political entity comprising present-day Persia and numerous other domains, founded in 550 BC. by Cyrus II of Persia. For its conquests, the Achaemenid empire was the second largest in ancient history after the nomadic empire of the Xiongnu; at the end of the 6th century BC came to understand: to the east the Indus valley, to the north the southern part of the Aral Sea, the Caspian Sea and the Black Sea to the Crimea, to the west southeastern Europe and Libya, to the south Egypt, Mesopotamia and the coast of the Persian Gulf and the Arabian Sea. At its peak the empire ruled over 44 - 52% of the world population, the highest percentage ever reached by any other empire or state in all of world history (the exact figures are however debated and very uncertain). This was possible because until the fourth century BC. most of the world's inhabitants were concentrated precisely between Persia and Egypt; some historians even bring the estimate to 71%, but this figure is considered excessive. The empire also controlled 64-68% of the Asian population, second in this only to the Median empire from which it itself derives. Due to the fact that it governs about half of the world's population, as well as its extension which included most of the known world, the Achaemenid empire is often considered the one that came closest to world domination in the course of history (obviously parameterized to its era and available means). It was also the first state to define itself with a term translatable as "empire", precisely Xšāça. The whole empire was firmly controlled by the Great King, to whom the satraps were subject, and connected at every point thanks to an efficient system of roads and post , speeded up by the movements on horseback and by the presence of rest stations. The Great King was revered as a full-fledged King God and proclaimed himself "King of all lands", "King of the World", "King of the Four Corners of the Earth" and "King of the Universe", titles already used by previous rulers in addition to the more classic "King of kings". The Persian Empire entered a major crisis in the 4th century, collapsing in 332 BC. following the battle of Gaugamela and the victory of the Macedonians led by Alexander the Great. The western part passed to Alexander, who had defeated Besso, while the eastern part (4.5 million km²) was divided into various lordships. The Macedonian leader, however, maintained the culture and style of government (demonstrating a great syncretism and respect) of the empire until 323 BC, the year of his death.

Among the numerous peoples dominated by the Medes, the Persians were those closest to them: like them they were divided into numerous tribes, many of which were nomads, while others had settled in fertile areas and practiced agriculture. During the wars of Phraorte against the Assyrians, the Persians provided the Medo ruler with cavalry and astute infantry units, but later managed to become independent from the Medes. It is to this period that the legend traces the origins of the Achaemenid dynasty, founded by the mythical Achemene. His son, Teispe, was the first to assume the title of "king of Ansan and Persia"; he was succeeded by his two sons: Ciro I on Ansan, and Ariamne on Persia, who were followed by their respective sons, Cambyses I and Arsame. When Ciassare definitively defeated the Assyrians, the Persian kings returned to submit to the ruler of Media while assuming the title of "Great King".

From Cyrus the Great to Xerxes I

Having ascended the throne of the "Great King" in 559 BC, Cyrus II immediately managed to unite the Persian tribes under his own hegemony. Taking advantage of Astiage's weakness, he rebelled and, allying himself with the