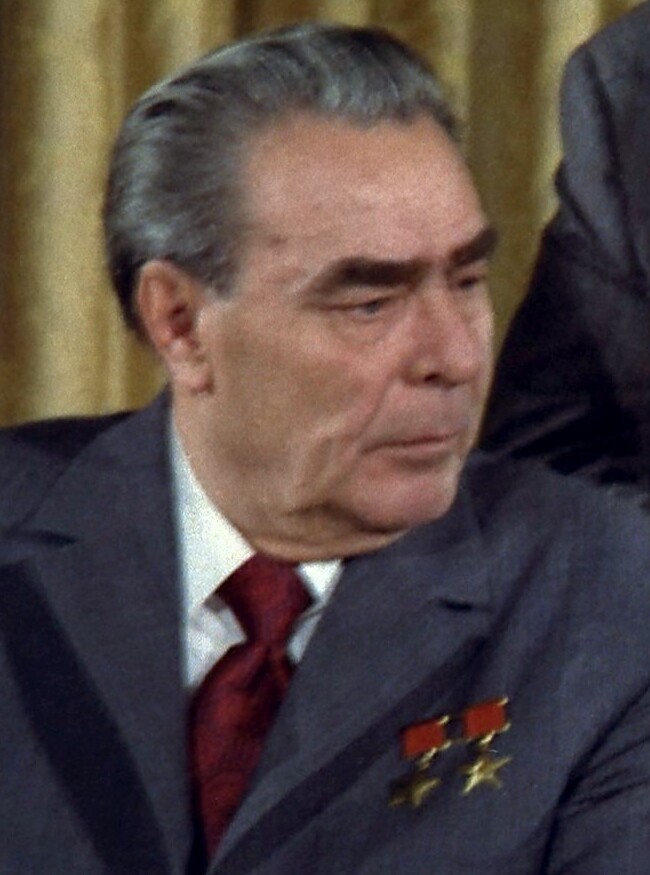 Leoníd Il'íč Bréžnev (in Russian: Леонид Ильич Брежнев?; In Ukrainian: Леонід Ілліч Брежнєв?, Transliterated: Leonid Illič Brežnjev; IPA: [lʲɪɐˈnʲid Брежнев? a Soviet politician and military man. He was general secretary of the Communist Party of the Soviet Union and, in fact, head of the USSR, from 1964 to 1982, although his power was exercised, at the beginning of his term, in competition with other members of the Politburo including Kosygin and Podgornyj. During the long years at the helm of the country he built an intricate system of control of the CPSU, feeding the bureaucratic apparatus (hinge between the party and the state) and realizing, especially in the final part of his political parable, a balance formed by personalities to him faithful such that, in the phase of the handover at the helm of the Soviet, he feared nothing but his own physical deterioration (which will increasingly prove to be a handicap since the first half of the seventies, due to the various and serious pathologies that By co-opting into the nomenklatura characters linked to him by bonds of friendship, kinship or interests, he also favored the increase in corruption and privileges, sharpening the distance between the party and civil society, which was suffering from the repression of the regime. Through the role of intellectuals (Solzhenitsyn and Sakharov), this gap contributed to spreading a brutal image of the USSR abroad and undermining its credibility in the eyes of the world.He was general secretary of the Communist Party of the Soviet Union from 1964 to 1982 and twice at the head of the Praesidium of the Supreme Soviet (head of state), from 1960 to 1964 and from 1977 to 1982. Under his rule, tensions between the West and the Communist world intensified, as in the case of the Prague Spring and the invasion of Afghanistan. His death opened the slow but constant path of liberalization of the structures of the USSR led by Mikhail Gorbachev.

Brezhnev was born in 1906 in Kamenskoe in Ukraine, to a local family. His father was a steel worker. His real surname was Brežnёv (Брежнёв, Brežnjòv) and so he called himself until 1956. Despite his transfer to Russia at a young age, he retained his Ukrainian pronunciation and habits throughout his life. Like many young people belonging to the working class, in the years following the Russian Revolution he received a technical education, first in agricultural economics, then in metallurgy. Graduated from the Dneprodzerźinsk Institute of Metallurgical Studies and graduated in metallurgical engineering, he worked for some time in some iron and steel industries in eastern Ukraine. He joined the youth organizations of the CPSU, the Komsomol, in 1923, and became a member of the party itself in 1931. In 1928 he married Viktoria Denisova. In 1935-1936 Brežnev left for military service, and after training at the tank school he became political commissar in an armored cavalry company. In 1936 he was also director of the Higher Technical Institute of Metallurgical Studies in Dneprodzerźinsk, before being transferred to the regional capital, Dnepropetrovsk. Here, in 1939, he became party secretary, in charge of managing the important military industries of the city. Brezhnev belonged to the first generation of Soviet Communists who had no real memory of what Russia was like before the revolution, and who were too young to have participated in those struggles for the leadership of the Party that raged after Lenin's death in 1924. When he entered Stalin was the undisputed leader, and he with many others grew up politically in the sign of Stalinism without asking any doubts or questions about the goodness of the choices that came from above. Those who survive