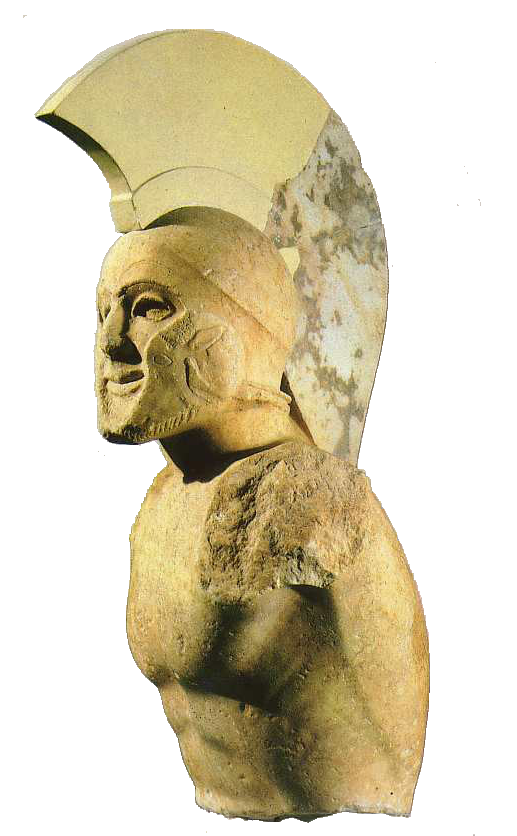 Leonidas I (Doric: Λεωνίδᾱς, Leōnídās; Ionic and Attic: Λεωνίδης, Leōnídēs, "son of the lion"; Sparta, about 540 BC - Thermopylae, 480 BC) was king of Sparta between 490 and 480 BC. Son of the king of Sparta Anaxandridas II, belonging to the Agiadi family, he succeeded his half-brother Cleomenes I, whose daughter he married Gorgo, and lost his life fighting with the 300 soldiers of his guard in the famous battle of Thermopylae, part of the Second Persian War . He was the seventeenth king of Sparta of the Agiadi dynasty, a lineage that the Greek historian Herodotus makes descend from the hero-demigod Heracles, saying that he was "son of Anaxandrida of Leo of Euricratides of Anaxander of Euricrates of Polydorus of Alcamene of Teleclo of Archelaus of Agesilao di Dorisso di Leobote di Echestrato di Agide di Euristene di Aristodemo di Aristomachus di Cleodeo di Illo di Eracle ».

The year of his birth is unknown, perhaps around 540 BC. According to Herodotus, Leonidas' mother was his father's granddaughter and had been barren for so long that the ephors, the five Spartan administrators who were elected annually, tried to get King Anaxandridas II to divorce his wife and choose another. The ruler refused, arguing that there was no reason to refuse his wife, and the ephors decided to allow him to take a second wife without setting aside the first. This second companion, descendant of the wise Chilo, soon gave birth to a son, Cleomenes. However, a year after Cleomenes was born, Anaxandridas' first wife also gave birth to a son, Dorieus. Leonidas was the second son of the king's first wife and the elder brother (or twin) of Cleombrotus. Since Leonidas was not the heir to the throne he had to be subjected, like all the other Spartan children, to the agoghé, at the end of which the young Spartiates became citizens. Leonidas was therefore one of the few Spartan kings who trained with the hard exercises of the Lacedaemonian institution.

Anaxandrida died in 520 BC. and Cleomenes ascended the throne between that year and 516 BC .. Dorieus was so indignant at being overtaken by his stepbrother that he left the city: after having tried in vain to found a colony in Africa he went to seek his fortune in Sicily, where after initial successes he was killed. The relationship between Leonidas and his older brothers is unknown, however he married Cleomenes' daughter, Gorgo, sometime before taking power in 490 BC. At the time of the battle of Sepeia against Argos (494 BC) Leonidas was clearly the heir to the agiad throne and fully citizen: according to some historians he ascended the throne in 493 BC. According to other conjectures, he ascended the throne only in 481 BC, and therefore he was not yet king neither when the Persian emissaries tried to obtain the subjugation of Sparta to Persia and met with a sharp rejection, in 492 or 491 BC, nor when in 490 BC. Athens asked Sparta for help to counter the Persians before the battle of Marathon. As Plutarch writes, when someone said to Leonidas "Except for being king, you are in no way superior to us" he replied "But if I were not better than you, I would not be king": as a man trained with agoghe, Leonidas he did not attach much importance to his royal blood, but rather believed that he had, like his brother Dorieus, superior skills in the competitive Spartan society, which he believed made him fit for government. In 481 BC Leonidas was chosen to lead the Allied Greek forces in the resistance during the Second Persian War; probably this gesture was not only a tribute to the military superiority of Sparta, as only two years after the death of Leonidas the coalition of the Greek cities preferred the Athenian leadership to Leotichidas and Pausanias, the regent successor of Leonidas, even if the rep