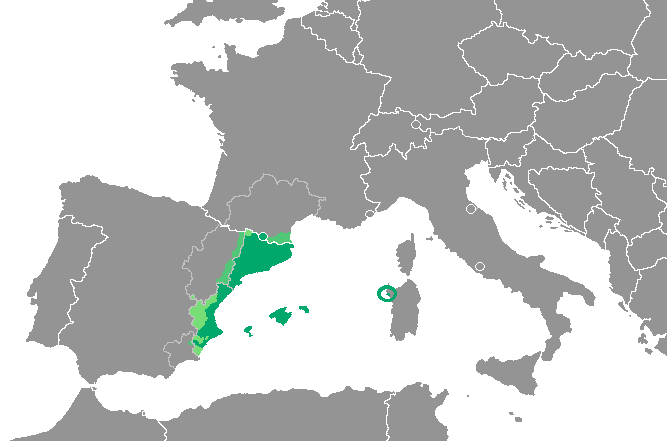 The Catalan language is a Western Romance language spoken by over 10 million people in Spain (Catalonia, the Balearic Islands, the Valencian Community, Murcia and the Aragonese Strip), France (Roussillon), Andorra and Italy (Alghero); to these must be added about 350,000 speakers residing in areas where Catalan is not considered an indigenous language (mostly concentrated in Europe and Latin America). In the Valencian Community a variety of Catalan is spoken which takes the name of Valencian (valencià), with numerous subvariants (castellonenc, apitxat, etc.), in the Balearic Islands another variant commonly known as Majorcan (mallorquí) is widespread, which is they reconnect the two subvariants of minorcan (menorquí) and ibizenco (eivissenc), while in the Sardinian city of Alghero an ancient oriental variant (alguerès) has been preserved which has undergone marked influences from both Sardinian and Italian. The varieties of Catalan therefore have many dialectal differences due to the autonomous development they have had over the last few centuries, however they are not reflected in the written language. Catalan influenced several Italian regional dialects and languages, especially in some regions formerly ruled by the Aragonese crown, and, in turn, was influenced by Italian, both in the Renaissance and in later periods. Catalan is very different from the rest of the Ibero-Romance languages ​​due to its grammar and words of Gallo-Romance origin, so it is closely connected with Occitan, French and the languages ​​of northern Italy, although it has received a important influence of the Ibero-Romance languages.

In the Middle Ages, ancient Catalan (sometimes improperly referred to as Limousin, confusing it with a dialect of Occitan) was the official language of the Aragonese chancellery and language of culture of the court, first by itself, then, with the advent of the dynasty Castilian of the Trastámara, together with the Spanish. With the arrival of the Borgias in the Roman See (Callisto III and his nephew Alexander VI), Catalan also became a language of court use there. The first Iberians who arrived in Sardinia were also native speakers of Catalan; from the beginning of the fifteenth century up to the entire first half of the seventeenth century, together with Latin, Catalan was established throughout the island as the language of administration and law, and in Alghero, a Genoese colony founded by the Dorias, once emptied by the its inhabitants and repopulated by Catalan families, it began to speak from the second half of the fourteenth century. It had a great influence on Sardinian (which continued to be the main language of use in Sardinia), especially on the Campidanese variant, afferent to the southern area of ​​the island. The Catalan, in medieval times, experienced a great literary splendor, witnessed since the thirteenth century by the famous philosophical-religious treatise by Ramon Llull. With the advent of the Habsburg dynasty to the throne of Spain, in the first half of the sixteenth century, a period of decline began for the Catalan that lasted for about three centuries. In this period the Spaniard acquired greater prestige. With the decrees of Nueva Planta (1707-1716) Philip V introduced Spanish as the only language of administration, teaching and courts in Catalan-speaking countries, thus relegating the latter to vernacular use only. In the early 1800s there were various attempts to recover and promote the use of Catalan, the most important of which was the Renaixença, a literary movement that initiated the rebirth of Catalan literature. In the early 1900s Pompeu Fabra completed the unification of the spelling (normalization) in order to represent the different variants with a single orthography. This gave a strong impetus to the production of books, theatricals, newspapers and therefore to the recognition of Catalan as a language. During the Franco dictatorship its use returned to