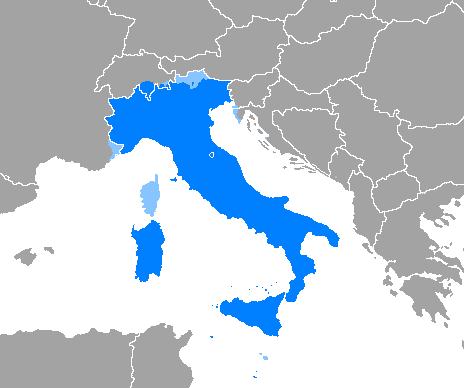 Italian ([itaˈljaːno]) is a Romance language mainly spoken in Italy. It is ranked 27th among languages ​​by number of speakers in the world and, in Italy, is used by about 58 million residents. In 2015, Italian was the mother tongue of 90.4% of Italian residents, who often acquire it and use it together with the regional variants of Italian, regional languages ​​and dialects. In Italy it is widely used for all types of communication in everyday life and is largely prevalent in the national media, in the public administration of the Italian state and in publishing. In addition to being the official language of Italy, it is also one of the official languages ​​of the European Union, San Marino, Switzerland, the Vatican City and the Sovereign Military Order of Malta. It is also recognized and protected as the "language of the Italian national minority" by the Slovenian and Croatian Constitution in the territories where populations of Istrian dialect live. It is widespread in Italian emigration communities, is also widely known for practical reasons in various geographical areas and is one of the most studied foreign languages ​​in the world. From a historical point of view, Italian is a language based on the literary Florentine used in the fourteenth century.

Italian is a neo-Latin language, that is, derived from the vulgar Latin spoken in Italy in Roman antiquity and profoundly transformed over the centuries.

From vulgar Latin to Italian vulgaris

Already in the classical era there was a "vulgar" use of Latin, which has come down to us through non-literary texts, graffiti, unofficial inscriptions or literary texts careful to reproduce the spoken language, as often happens in comedy. Alongside this, there was a "literary" Latin, adopted by classical writers and linked to the written language, but also to the language spoken by the most socially relevant and cultured classes. With the fall of the Roman Empire and the formation of the Roman-barbarian kingdoms , there was a scleroticization of written Latin (which became an administrative and scholastic language), while the spoken Latin merged more and more intimately with the dialects of the Latinized peoples, giving life to the neo-Latin languages, including Italian. they label the speeches that developed in this way in Italy during the Middle Ages as "Italian vulgar", in the plural, and not yet as "Italian language". In fact, the available evidence shows marked differences between the speeches of the different areas, while there was no common vulgar model of reference. Capua and dating back to 960: it is the Placito Cassinese (also called Placito di Capua or "Placito capuano"), which is essentially a sworn testimony of an inhabitant about a dispute over the property boundaries between the Benedictine monastery of Capua pertaining to the Benedictines of he abbey of Montecassino and a small nearby fiefdom, which had unjustly occupied a part of the territory of the abbey: "Sao ko kelle terre per kelle fine que ki contains thirty years the possessed part Sancti Benedicti." ("I know [I declare] that those lands within the boundaries contained here (reported here) have been owned by the Benedictine order for thirty years"). It is only a sentence, which however for various reasons can now be considered "vulgar" and no longer frankly Latin: the cases (except for the genitive Sancti Benedicti, which takes up the diction of ecclesiastical Latin) have disappeared, the conjunction ko (" che ") and the demonstrative kelle (" those "), morphologically the verb sao (from the Latin sapio) is close to the Italian form, etc. This document is followed at a very short distance by other placites from the same geographical-linguistic area, such as the