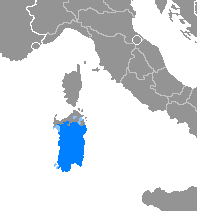 Sardinian (native name sardu / ˈsaɾdu /, lngua sarda / ˈliŋɡwa ˈzaɾda / in the Campidanese varieties or limba sarda / ˈlimba ˈzaɾda / in the Logudorese varieties and in LSC orthography) is a language spoken on the island of Sardinia and belonging to the Indo-European branch which, for differentiation evident both to native speakers, to non-Sardinians, and to scholars of all time, it must be considered autonomous from the dialectal systems of the Italic, Gallic and Hispanic area and therefore classified as an idiom in its own right in the neo-Latin landscape. Since 1997, the regional law has recognized the Sardinian language of equal dignity with respect to Italian. Since 1999 the Sardinian language is also protected by the national law on linguistic minorities; Among the twelve groups in question, the Sardinian one constitutes the most robust community in absolute terms, although in continuous decrease in the number of speakers. Although the community of speakers can be defined as having a high linguistic awareness, Sardinian is currently classified by UNESCO in its main dialects as a language in serious danger of extinction (definitely endangered), being seriously threatened by the process of linguistic drift towards the Italian, whose assimilation rate among the Sardinian population is now quite advanced; that in adulthood would no longer be able to carry on a conversation in the island language and less than fifteen percent, within the youth, would have inherited residual skills.

Sardinian is classified as a Romance language and is considered by many scholars to be the most conservative of the languages ​​deriving from Latin; by way of example, the historian Manlio Brigaglia notes that the Latin sentence pronounced by a Roman stationed at Forum Traiani Pone mihi tres panes in bertula ("Put me three loaves in the saddlebag") would correspond to its current Sardinian translation Ponemi tres panes in sa bèrtula. The relative proximity of the Sardinian language to Latin had also been analyzed by the Italian-American linguist Mario Andrew Pei in his comparative study of 1949 and even earlier noted, in 1941, by the French geographer Maurice Le Lannou during his research period in Sardinia. Although the lexical basis is therefore largely of Latin origin, Sardinian nevertheless retains various testimonies of the linguistic substratum of the ancient Sardinians before the Roman conquest: Proto-Sardinian etymes are highlighted and, to a lesser extent, also Phoenician-Punic in different words and above all toponyms , which in Sardinia would have been preserved in a higher percentage than in the rest of Latin Europe. These etymes refer to a paleo-Mediterranean substratum that would reveal close relations with the Basque. In medieval, modern and contemporary ages, the Sardinian language received superstrate influences from Greek-Byzantine, Ligurian, Tuscan vulgar, Catalan, Castilian and finally Italian. Characterized by a marked physiognomy that stands out from the most ancient sources available, the Sardinian is considered by various authors to be part of an autonomous group and clearly differentiated from the Italian-novel and has been related by Max Leopold Wagner and Benvenuto Aronne Terracini to the now extinct Latin of Africa, with whose varieties it shares various parallels and a certain linguistic archaism, as well as a precocious detachment from the common Latin lineage; Wagner (1951) annexes Sardinian to western Romània, while Matteo Bartoli (1903) and Pier Enea Guarnerio (1905) ascribe it to an autonomous position between western and eastern Romània. By still other authors, Sardinian is classified as the only surviving exponent of a branch once inclusive even of Corsica and the aforementioned southern shore of the Mediterranean.